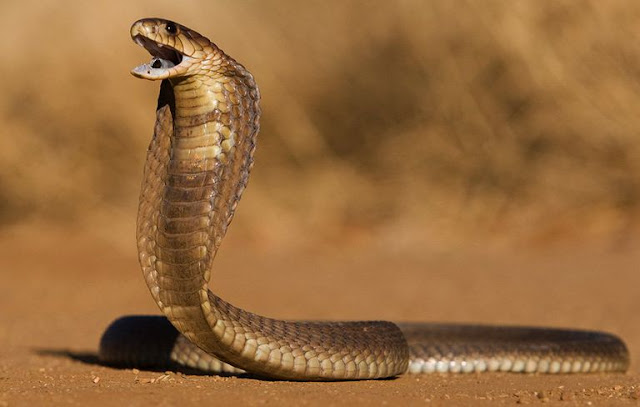 Cobras are highly venomous snakes famous for the threatening hood at their neck.

There are 28 species of cobras, who are regarded as “true cobras” (genus Naja).

The king cobra despite the word “cobra” in its common name, is not a member of the Naja genus (the “true cobras”).

Cobras are long lived snakes. The lifespan is from 20 to 30 years, depending on the species.

The largest true cobra species is the forest cobra (Naja melanoleuca), reaching up to 3.1 meters (10 feet) in length.

Cobras live 20 years in the wild. They might live longer in captivity.

They have excellent night vision and sense of smell, which they use to detect prey. Sense of smell is located on the tongue.

The smallest true cobra species is the Mozambique spitting cobra (Naja mossambica) which is about 1.2 meters (4 feet) long.

All cobras have specialized muscles and ribs in the neck that can flare out when the cobra feels threatened. Cobras are able to raise their body up, spread the hood, and hiss loudly to scare off most threats.

In addition to their trademark hoods, cobras have round pupils and smooth scales.

Antidote (substance that can reverse effect of the venom) is made of the same venom that induces intoxication.

Cobras can be nocturnal or diurnal, depending on the species.

Cobras are Elapids, a type of poisonous snake with hollow fangs fixed to the top jaw at the front of
the mouth.

Females lay between 20-40 eggs. Incubation time (time until they hatch) lasts between 60-80 days.

Cobras use their forked tongue to smell prey. The tongue moves in and out, picking up odor particles from the ground and passing them over a special smelling organ in the roof of the mouth, called the Jacobson’s organ. This helps the snake sniff out its next meal.

Spitting cobras can spit their venom with incredible accuracy. They can align with predator's head and deliver venom right into eyes.

The cobra captures its prey by feeling vibrations on the ground and scoping out what’s causing the vibrations.

The cobra, like other venomous snakes, is lightning fast when it strikes.

Cobra’s venom is a neurotoxin that stops the victim’s breathing and heartbeat.

Cobras are carnivorous snakes and feed on other snakes, lizards, small mammals, birds and bird eggs. A cobra can eat almost any type of snake, including other venomous snakes.

Cobras produce large amount of venom. With just one bite, cobra can kill large elephant or 10-15 adult humans. Venomous fangs have half an inch in length.

Snake charmers in Burma use cobras to entertain audience. Cobra respond well to visual stimulus and can be "trained" to show hood when it rise from the bag. Snake charmers remove venomous teeth to prevent bites. This tradition is illegal and inhumane for snakes.

Like all snakes, a cobra’s jaws have two independent bones that are loosely attached to its skull.
This lets the snake swallow an animal that is wider than its own head.

Cobras are the only snakes that show at least some sort of parental behavior. They build nest for their eggs and guard them until they hatch.

The throat of the cobra has specially designed spikes that help it to digest its food. The spikes work to pierce the prey as it moves through the throat. When a cobra swallows an egg, the spike breaks apart the shell, allowing the yolk and egg white to slide through the rest of the digestive system, and the shell is regurgitated.

Cobras can go for days or even months without eating, depending on how large their last meal was. Their
slow metabolism makes this possible.

Cobras reproduce by laying eggs. Before female lays her eggs, she builds a nest with leaves, using her body and head to move things. Females typically lay 20 to 40 eggs at a time. Than she covers eggs with leaves, and places herself on top to incubate them until they hatch.

Cobra is famous for its hood, which is a flap of skin that can be spread when snake feels angry or threatened. Hood can scare predators and chase them away.

Wild boars and mongooses are known to steal cobra eggs.

The mongoose is the best-known enemy of the cobra. Mongooses have thick fur to protect against cobra fangs and often defeat cobras in fights using their speed and agility. They can bite the cobra’s back before the snake can defend itself. Cobras are also threatened from other snakes, a few large birds of prey like the secretary bird and humans.

They can be green, brown, dark brown in color.

Currently, the only cobra species the IUCN lists as endangered is the Fiji snake (Ogmodon vitianus) but the numbers of the other 27 species have been reduced by the loss of habitat in some parts of their range.

Cobras are very intelligent, and can learn quickly, which helps them avoid dangerous areas.

Smallest species of cobra, Mozambique spitting cobra, is 4 feet long. Largest species is King Cobra. It weighs around 13 pounds and has 18 feet in length.

Some cobra species “play possum” and may pretend they are dead by convulsing and then lying completely still until the threat has passed.

Their metabolism is very slow, so they need to eat every couple of months.

The sight of a large cobra reared up in a bold warning stance is known to stop elephants in their tracks.

A group of cobra is called a quiver.

The origin of this genus name is from the Sanskrit nāga (with a hard “g”) meaning “snake”.

Group of cobras is called "quiver".

All true cobra species are capable of delivering a fatal bite to a human. But they only attacks a human if it feels threatened.

Snake charming is the practice of pretending to hypnotize a snake by playing an instrument called pungi or bansuri. The most popular species are those native to the snake charmer’s home region, typically various kinds of cobras. Many snake charmers remove the fangs or the venom sacs from their snakes, because it is too dangerous. This practice is illegal, and is considered inhumane to the snake.

It is also illegal to keep a cobra as a pet.