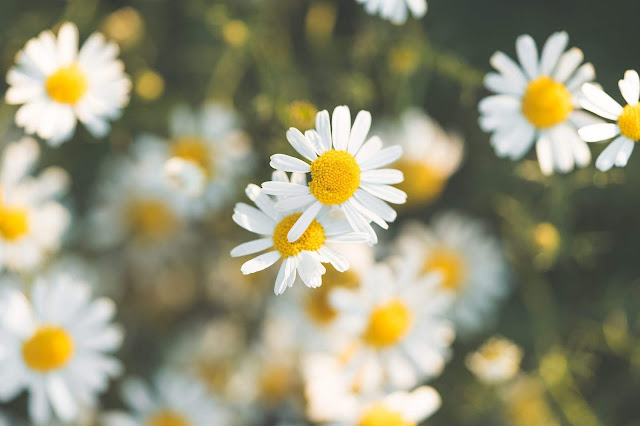 The daisy is a flowering plant belonging to the family Asteraceae (also called Compositae).

Daisy is used in homeopathy to accelerate healing after surgical procedures and to alleviate back ache. It is also used to treat injuries in animals.

There are approximately 4000 species of daisies that differ in size, shape, color and type of habitat.

Daisy is used in folk medicine (usually in the form of tea) to relieve cough, to improve digestion and to slow bleeding.

They are found on every continent except Antarctica.

Daisy is a symbol of purity and innocence.

Daisies can live in both wet and dry climates, and they are resistant to pesticides and insects.

Daisy is biennial plant which means that its life cycle ends after two years.

Not a picky plant, daisies grow well both in full sun and in part sun or shady areas.

Juice extracted from daisies was used for wound healing in ancient Rome.

Daisy is herbaceous plant that can grow from 7 centimeters to 1.2 meters (3 inches to 4 feet) in height, depending on the species.

Daisy is attached to the ground via rhizome.

Daisy has green leaves that form rosette at the base of the stem. The Daisy leaf texture varies and may be smooth or covered with hairs on the surface. Leaves of most species of daisy are divided in several lobes and have narrow base.

Daisy is rich source of vitamin C. It has pleasant taste and it can be used as a part of salads, soups and sandwiches. Both flowers and leaves are edible.

The Daisy flower stalks are generally longer than the leaves.

The center of a daisy is called the flower head or floral disc. Though it looks like one piece, the flower head is composed of many small flowers, called disk florets; they are small and have tubular shape.

Daisy can propagate via seed (at the beginning of the autumn) or by division after flowering (during the spring).

Ray florets form outer part of the flower and they look like typical petals.

Daisy blooms during the summer. Bees are the main pollinators of daisies.

Each ray or disk florets is an individual flower made up of a stamen, carpel and ovary. The ray florets, however, are sterile. Only the disk florets are fertile. Each carpel contains one or more ovaries, which house the female reproductive components of the daisy. The stamen are the male parts of the daisy and produce the pollen that fertilizes the female parts.

The entire flower that is known as a daisy is a collection of disk flowers and ray flowers that are secured by a base called a peduncle. The peduncle forms from the stem of the daisy plant and holds all of the composite flowers together.

Daisy has composite flower that consists of large number of small flowers, called florets. Ray florets form outer part of the flower and they look like typical petals. Disk florets are located at the center of the flower; they are small and have tubular shape.

Within the insect world, bees are the primary pollinators and are responsible for the propagation of many types of plants and flowers, including daisies.

When a bee lands on a daisy flower, it immediately seeks out nectar; in the process, it picks up thousands of microscopic pollen grains on its body. As it moves around on the daisy, it redeposits the pollen from the male anthers to the female stigmas. It also moves from flower to flower repeating this procedure hundreds of times each day.

Daisy is attached to the ground via rhizome.

Some daisy species are annual, lasting only one year, and some are biennial (life cycle ends after two years).

Daisy has green leaves that form rosette at the base of the stem. They can be smooth or covered with hairs on the surface. Leaves of most species of daisy are divided in several lobes and have narrow base.

The flower symbolism associated with the daisy is purity, innocence, loyal love, beauty, patience and simplicity.

In Christianity, the daisy is a sacred symbol of Virgin Mary signifying her chastity, grace and purity.

The April birth flowers are Daisy and Sweet Pea.

Daisy comes from the Old English “daes eage,” meaning “day’s eye.” The name refers to the way they close their petals in the evening, and open again at dawn, marking the beginning of a new day.

Daisy is herbaceous plant that can grow from 3 inches to 4 feet in height, depending on the species.

Daisies have been popular flowers in history, believed to be more than 4,000 years old.

Daisies have lots of medicinal properties. They are thought to slow bleeding, relieve indigestion and ease coughs. In homeopathy, the garden daisy is known as the gardener’s friend for its ability to ease an aching back.

Daisy leaves can make a tasty addition to salads (they’re closely related to artichoke and are high in Vitamin C).

The largest game of “He Loves Me, He Loves Me Not” was played by 331 people in Milan, Italy. Participants plucked daisy petals to determine if their secret crush loved them back.

Daisies are often depicted in meadows in Medieval paintings, also known as a “flowery mead.”

Egyptian ceramics were decorated with daisies.

The English daisy (Bellis perennis) is considered a stubborn weed in North American lawns.
Share This