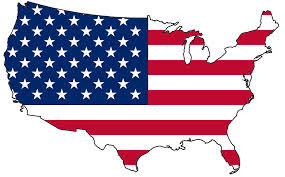 The U.S. is generally divided into six large regions: New England; the mid-Atlantic; the South; the Midwest; the Southwest, and the West. Though loosely defined, these zones tend to share important similarities, including climate, culture, history, and geography.

On July 4, 1776, the Declaration of Independence was issued, establishing the United States of America.

The US is the 4th largest country in the world by land area and 3rd by population.

The Americas were also known as Columbia, after Columbus, prompting the name District of Columbia for the land set aside as the U.S. capital.

The US is a diverse country with a multicultural society.

The average supermarket in the United States wastes about 3,000 pounds of food each year.

The US has the world's largest economy.

The US developed the first nuclear weapons, using them on the Japanese cities of Hiroshima and Nagasaki near the end of World War 2.

The Mississippi and Missouri Rivers combine to form the longest river system in the US and the fourth longest in the world.

The United States is made up of many cities, suburbs, and smaller towns. Big cities can be found in every state. The cities, states, and regions of the United States often have unique landmarks, foods, celebrations, and dialects that make them different from other areas of this vast nation.

It is usually cooler in the north and warmer in the south. Most of the United States goes through four seasonal changes: winter, spring, summer, and fall.

Alaska was purchased from Russia in 1867 and is the largest state in the US by land area.

Today, 66 percent of all Americans are considered to be overweight.

Hawaii is the most recent of the 50 states in the US (joining in 1959) and is the only one made up entirely of islands.

With over 3.7 million square miles and over 300 million people, the United States is the third largest country by both total area and population. With a gross domestic product (GDP) of over $13 trillion, the U.S. has the largest national economy in the world.

The United States is the world's third largest country by total area after Russia and Canada.

On every Fourth of July, children who are descendants of signers of the Declaration of Independence symbolically tap the Liberty Bell 13 times while bells across the nation also ring 13 times in honor of the patriots from the original 13 states.

Most of the world's tornadoes occur in the Midwest region of the US known as Tornado Alley.

One out of every seven Americans has at least 10 credit cards.

The most populated city in the US is New York City, followed by Los Angeles and Chicago.

The phrase "united States of America" was first used officially in the Declaration of Independence (July 4, 1776). On November 15, 1777, the Second Continental Congress adopted the Articles of Confederation, the first of which stated "The Stile of this Confederacy shall be 'The United States of America.'" The name was originally proposed by Thomas Paine.

English is the most commonly spoken language in the US, followed by Spanish.

The Statue of Liberty was a special gift that was given to the United States by the country of France. The statue is located on a small island off the coast of New York and New Jersey. The statue has been a symbol of freedom to Americans since it welcomed many immigrants on their way in to Ellis Island.

The US was the leading force behind the development of the Internet.

The US consumes more petroleum than any other country in the world.

The first confirmed European landing in present-day United States territory was by Christopher Columbus, who visited Puerto Rico on November 19, 1493.

The most popular team sports in the US are American football, baseball, basketball and ice hockey.

Benjamin Franklin thought that the wild turkey should be the national bird of the USA.

For more information, check out maps of the United States or take a closer look at the US flag.