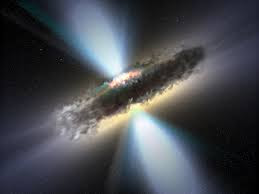 The nearest black hole is 1,600 light years away. That is about 16 quadrillion kilometers for Earth.

* Black holes emit x-ray radiation and get smaller and smaller until they disappear, or "evaporate".

Most black holes are formed from the death of large stars (larger than the sun) that run out of fuel and cannot sustain its nuclear reaction. The star loses the force pushing itself outward and is overcome by the force of its own gravity pulling inward. Eventually, the star has so much gravity and is so compacted that it "eats itself" until there is nothing left but a hole in the "fabric" of space-time, created by the gravity left over from the star.

The gravity around the "hole" of a black hole is so strong that NOTHING can make its way back out after a critical distance.

The critical distance at which nothing can escape is called the Event Horizon.

* Even light cannot travel back out of a black hole after crossing the Event Horizon.

* Even before crossing the event horizon, though possible to travel away from the black hole, it is not easy. Even light has a hard time getting out, so light being emitted from something almost at the Event Horizon but not yet inside the threshold takes a much longer time to escape and be seen by someone then it would in normal space going at 186,000 miles per second.

The Singularity is the true point of destruction, the actual hole part of the black hole, although any object, especially a person, would be long dead before they reached the Singularity.