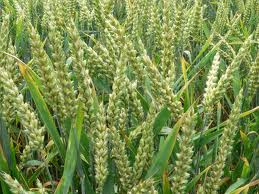 Wheat is the number one crop grown in Oklahoma. Most of the wheat grown here is hard red winter wheat. This is the kind of wheat that grows best in our climate and in states like Kansas, Colorado and Texas. Hard red winter wheat is used mostly to make bread.

The most common varieties of hard, red winter wheat planted by Oklahoma producers are Jagger, Endurance and Overley.

In 2003, Oklahoma ranked number two in the nation in the production of hard red winter wheat.


Wheat is a member of the grass family that produces a dry one-seeded fruit commonly called a kernel. More than 17,000 years ago, humans gathered the seeds of plants and ate them. After rubbing off the husks, early people simply chewed the kernels raw, parched or simmered. Wheat originated in the “cradle of civilization” in the Tigris and Euphrates river valley, near what is now Iraq. The Roman goddess, Ceres, who was deemed protector of the grain, gave grains their common name today “cereal.”

Wheat was first planted in the United States in 1777 as a hobby crop.

More foods are made with wheat than any other cereal grain.

About half of the wheat grown in the United States is used domestically.

The state of Kansas is the largest wheat producer in the United States with North Dakota a close second.

Wheat is grown on more land area worldwide than any other crop and is a close third to rice and corn in total world production. In 2004, world wheat production was approximately 624 million tons.

Because wheat is such a versatile crop, it is being harvested somewhere in the world every month of the year.

Wheat is well adapted to harsh environments and is mostly grown on wind-swept areas too dry and too cold for rice and corn.

Unlike most other crops, hard red winter wheat is planted in the fall and harvested in the spring.

In the summer, wheat producers prepare the soil for planting. They drive a
tractor that pulls the plow through the fields. The plow turns the soil over and kills all the weeds. Then the farmer connects the tractor to a disk harrow and drives it over the field. The disk harrow breaks the soil down into smaller pieces. When the soil is ready for planting, the farmer uses a grain drill to plant the seed.

The wheat plant will grow about six inches before the frost comes. Each plant grows by producing more leaves and new stalks from the base of the plant. The new stalks are called “tillers.”

When the weather gets cold the tiller will stop growing. This is called the dormant period. On most farms in the Great Plains cattle feed, or graze, on the young wheat plants while they are in their dormant period. The plants grow back. They are not damaged by proper grazing.

In the spring, the warm moist days make the wheat plants grow quickly. As the wheat comes out of its dormant period, more tillers of wheat emerge. Each tiller can form another head of wheat.

Some varieties of wheat grow as tall as seven feet, but most are only between two and four feet tall.

During the early summer, the plants begin to fade from dark green to tan and then to a golden brown. Then the wheat is ripe and nearly ready for harvest. Now the wheat producer must race with the weather to get the wheat out of the fields.

Some years the wind and rain keep the plants from ripening, and they cannot be harvested. Other years hail may break all the heads, or a lightening storm may start a range fire.

When the weather cooperates, and the wheat is ripe, the farmer must move fast. He checks the wheat by rubbing a wheat head between his hands, blowing the chaff away and then chewing some of the grain. If the kernels crack easily and get soft as they are chewed, the wheat is ready to harvest.

The farmer drives a combine across the fields to harvest the grain. When the storage bin of the combine is full, he empties it into a truck. Someone else drives the truck to the grain elevator in town.

It takes a combine nine seconds to harvest enough wheat to make 70 loaves of bread.

Around 8,000 years ago, a mutation or hybridization occurred within emmer wheat, resulting in a plant with seeds that were larger but could not sow themselves on the wind. While this plant could not have succeeded in the wild, it produced more food for humans. In cultivated fields this plant outcompeted plants with smaller, self-sowing seeds and become the primary ancestor of modern wheat breeds.

Columbus packed wheat on his ships on his second voyage to the New World.

While wheat was grown in the United States during the early colonial years, it was not until the late 19th century that wheat cultivation flourished, owing to the importation of an especially hardy strain of wheat known as Turkey red wheat. Russian immigrants who settled in Kansas brought Turkey red wheat with them.

Wheat supplies about 20 percent of the food calories for the world’s people and is a national staple in many countries. In Eastern Europe and Russia, over 30 percent of the calories consumed come from wheat. About 1/3 of the world's people depend on wheat for their nourishment.

The per capita consumption of wheat in the United States exceeds that
of any other single food staple.

A bushel of wheat yields about 42 pounds of white flour or 60 pounds of whole wheat flour.

A bushel of wheat weighs about 60 pounds.