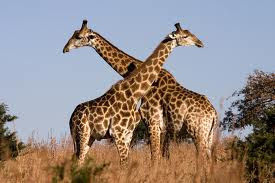 Giraffes are the tallest mammals on Earth. Their legs alone are taller than many humans—about 6 feet.

They can run as fast as 35 miles an hour over short distances, or cruise at 10 mph over longer distances.

Giraffes only need to drink once every few days. Most of their water comes from all the plants they eat.

Female giraffes give birth standing up. Their young falls more than 5 feet to the ground at birth.

Giraffes learn to stand just 30 minutes after birth and can run with their mothers just 10 hours after birth.

You would have to run in order to keep up with a giraffe walking because every step a giraffe takes is 15 feet long.

When giraffes were first brought to Rome in 46 B.C., they were thought to be as big as a camel, with spots like a leopard. Although we've long since learned the giraffe is not a combination of these animals, the name scientific name camelopardalis stuck.

Giraffes are fast and can reach speeds of up to 35 mph.

A giraffe's feet are the size of a dinner plate—approximately 12 inches across.
Females use their hooves as weapons to protect their young. They are strong enough to kill a lion.

Both male and female giraffes have two distinct, hair-covered horns called ossicones. Male giraffes use their horns to sometimes fight with other males.

Giraffes are a ruminant, which means they have more than one stomach to help them digest their food. In fact, they have 4 stomachs!

A giraffe’s spots are much like human fingerprints. No two individual giraffes have exactly the same pattern.

A giraffe's toungue is 18 inches long.

The idea that giraffes are mute is very wrong! Although they are normally quiet, calves bleat and make a mewing call, cows seeking lost calves bellow, and courting bulls may emit a raucous cough. Giraffes also give alarm snorts, and moaning, snoring hissing, and flutelike sounds have been reported.

The mighty giraffe can drink 12 gallons in one setting.

The age of a giraffe can be calculated from its spots. The darker the spots, the older the giraffe.

Giraffes have extremely elastic blood vessels in their neck to help them lean their heads down to drink. It's a good thing they do or they would lose consciousness each time they tried to get water from a stream.

The giraffe has the same number of vertebrae in its neck that most other mammals have (seven).