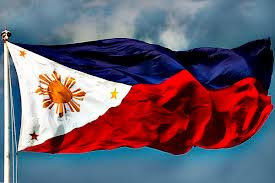 The Philippines ranks 12th among the most populous countries in the world, the population of this country is about 90 million people.

The Philippines has more than 200 volcanoes, although only some of them are active.

The flag of the Philippines – the only flag in the world, where colors can be reversed: in wartime, the upper band is red, the bottom – of the blue, and in times of peace – on the contrary.

In the Philippine cave complex Tabone (Tabon Cave Complex) were found fossils of Homo sapiens. According to studies, this area was inhabited by about fifty thousand years ago.

The highest point in the Philippines – Mount Apo, located on the Mindanao island, it reaches a height of 2,954 meters.

About 80% of the total population are Catholics.

The climate in the Philippines is tropical and monsoonal. The country has an average yearly temperature of 26.5°C (79.7°F); May is the warmest month, while January is the coolest.

The monsoon rains, called habagat, hit from May to October, bringing torrential rain which is abetted by frequent typhoons. An average of 6 or 7 typhoons per year strike the Philippines.

November to April is the dry season, with December through February also being the coldest part of the year.

Filipinos have a different ethnic background, such as Malay, Chinese, Spanish, American, etc.

The country got its name in honor of the Spanish King Philip II.

The capital city of the Philippines Manila is named in honor of a mangrove tree with white flowers (nilad).

In the period from 1521 to 1898 years, the Philippines was a Spanish colony. After, the archipelago became the property of the United States.

The Philippines was the first country in South-East Asia, which gained independence after the Second World War, in 1946.

The Philippine area covers about 300,000 square kilometers, which corresponds approximately to the area of ​​Italy.

The safe in the geological sense Philippine called “Palawan”. It is the most distant from the volcanoes and earthquake areas.

The country's closest neighbors are the island of Borneo to the southwest, and Taiwan to the north.

The Philippine islands are mountainous, and seismically active. Earthquakes are common, and a number of active volcanoes dot the landscape, such as Mt. Pinatubo, the Mayon Volcano, and the Taal Volcano.

The most popular month for weddings in the Philippines – is December (until early January), and not June.

The first representatives of the Philippines who have reached the top of the hit parade “Top 100 songs of the “Billboard” was the band “Rocky Fellers of Manila”.

There are only two seasons – a warm wet season and cool dry season in the Philippines. The dry season lasts from October to June, and wet – for the remainder of the year.

On July 4, 1946, the Republic of the Philippines was established. The early governments struggled to repair the damage caused by World War II.

From 1965 to 1986, Ferdinand Marcos ran the country as a fiefdom. He was forced out in favor of Corazon Aquino, the widow of Ninoy Aquino, in 1986.

In the course of the history of the Philippines had early contact with China, some of the Arab countries and Cambodia, but the archipelago was not known to the Western world until the 17th March 1521, when Magellan arrived to the Samar island. Since then the Philippines was a colony of many countries such as: Spain, Portugal, the United States and Japan.

The official languages of the Philippines are Filipino (which is based on Tagalog) and English.

Philippine University of San Carlos in Cebu City, founded by the Spanish in 1595, is superior in age from Harvard University and is the oldest university in Asia. The second-oldest institution of higher education is Asia the University of Santo Tomas in Manila, founded in 1611.

The Republic of the Philippines is a sprawling archipelago set in the western Pacific Ocean.

The Philippines is an incredibly diverse nation in terms of language, religion, ethnicity and also geography. Ethnic and religious fault-lines that run through the country continue to produce a state of constant, low-level civil war between north and south.

A video camera with a single chip was first created by Marc Loinaz – a Filipino inventor from New Jersey.

The first International Grandmaster from Asia was Eugenio Torre, who won the Chess Olympiad, held in 1974 in Nice (France).

The fluorescent lamp was invented by Agapito Flores Filipino scientists from the island of Cebu.

Filipinos are the world’s largest network of diasporas, which covers more than 11 million people.

There are the world’s deepest ocean trenches, at the bottom of the Pacific Ocean. Mindanao Trench, which is near the Philippines, reaches a depth of six and a half miles.

The Philippines has an American-style democracy, headed by a president who is both head of state and head of government. The president is limited to one 6-year term in office.

The highest court is the Supreme Court, made up of a Chief Justice and fourteen associates.

The current president of the Philippines is Benigno "Noy-noy" Aquino.

Due to early colonization by the Spanish, the Philippines is a majority Roman Catholic nation, with 80.9% of the population self-defining as Catholic.

Other religions represented include Islam (5%), Evangelical Christian (2.8%), Iglesia ni Kristo (2.3%), Aglipayan (2%), and other Christian denominations (4.5%). Approximately 1% of Filipinos are Hindu.

The Muslim population live mostly in the southern provinces of Mindanao, Palawan and the Sulu Archipelago, sometimes called the Moro region. They are predominantly Shafi'i, a sect of Sunni Islam.

Some of the Negrito peoples practice traditional animist religion.


The original inhabitants, the Negrito, now number only about 30,000. The majority of Filipinos are from various Malayo-Polynesian groups, including the Tagalog (28%), Cebuano (13%), Ilocano (9%), Hiligaynon Ilonggo (7.5%) and others.

Philippines are considered the “text capital of the world.” Every day, 35 million mobile subscribers in the country are sending about 450 million short text messages (SMS). This is more than the total number of daily text messages sent in the United States and Europe together.

Despite popular belief, karaoke was invented in the Philippines, but not in Japan. Karaoke invented by Roberto Del Rosario, calling it “Sing along with the system”. And the name “karaoke” came later, translated from the Japanese it means “singing without accompaniment.”

The most rare and expensive shell in the world «Conus Gloriamaris» – one of the 12,000 species of seashells found in the Philippines. In addition, of the 500 known coral species in the world, about 488 have been found on the archipelago of .

Tribes Tianjin and Integ, living in the mountainous areas of the northern Philippines, kissing each other in a special way. They advance lips together and quickly inhaled.

The Philippines has a population of more than 90 million people and an annual growth rate around 2%, making it one of the most populous and fastest growing countries on Earth.

Aurora – the only Philippine province, named in honor of the first lady.

There are Rice Terraces on the slopes of the Philippine Cordilleras, whose history is two thousand years old. They are considered a UNESCO World Heritage Site.

The first European who visit the Philippines is a Portuguese explorer Ferdinand Magellan.