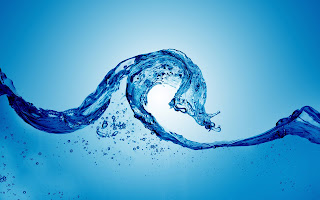 Enjoy our fun water facts. Learn how important water is to life on Earth as well its many amazing uses and properties. Read about its different size, shape and form and much more with our huge range of interesting facts about water.

Water is made up of two elements, hydrogen and oxygen. Its chemical formula is H2O.

Each molecule of water is made up of two hydrogen atoms bonded to a single oxygen atom.

The existence of water is essential for life on Earth.

Water covers around 70% of the Earth’s surface.

Found in the Pacific Ocean, the Mariana Trench is the deepest known point in the world’s oceans.

Ocean tides are caused by the rotation of the Earth and the gravitational pull of the Moon and Sun acting on ocean water.

Water from a sea or ocean is known as seawater. On average, every kilogram (2.2lb) of seawater contains around 35 grams (1.2 oz) of dissolved salt.

The freezing point of water lowers as the amount of salt dissolved in at increases. With average levels of salt, seawater freezes at -2 °C (28.4 °F).

The longest river in the USA is the Missouri River. At around 2,340 miles (3,770 km) in length it is slightly longer than the Mississippi River (2,320 miles). The two combine to form the longest river system in North America.

Water makes a good solvent with many sugar, salts and acids easily dissolving in it. On the other hand oils and fats don’t mix well with water.

The water cycle involves water evaporating (turning into a gas), rising to the sky, cooling and condensing into tiny drops of water or ice crystals that we see as clouds, falling back to Earth as rain, snow or hail before evaporating again and continuing the cycle. Learn more about the water cycle.

Water in the form of ice is found at the polar ice caps of the planet Mars, some scientists have also suggested the possibility of liquid water on the red planet.

Pure water has no smell and no taste, it also has a pH level around 7.

While most people know that water boils at 100 °C (212 °F), this is at the normal conditions of sea level. The boiling point of water actually changes relative to the barometric pressure. For example, water boils at just 68 °C (154 °F) on the top of Mount Everest while water deep in the ocean near geothermal vents can remain in liquid form at temperatures much higher than 100 °C (212 °F).

Water expands as it cools from 4 °C to 0 °C (above 4 °C it does the opposite). In freezing conditions, water has been known to burst water pipes as it freezes to ice.

Most people around the world have access to clean drinking water but it is a major problem in poorer areas of the world. Water pollution and low quality water can lead to dangerous bacteria, disease and viruses such as E coli and Cryptosporidium.

Drinking water is needed for humans to avoid dehydration, the amount you need each day depends on the temperature, how much activity you are involved in and other factors.

An important use for water is in agricultural irrigation, this is when water is artificially added to soil in order to assist the growth of crops.

Water is used frequently by firefighters to extinguish fires. Helicopters sometimes drop large amount of water on wildfires and bushfires to stop fires spreading and limit the damage they can cause.

The water industry helps deliver water to homes in various cities and countries around the world. This can involve services such as purification, sewage treatment, filtering, distillation and plumbing.

Electricity can be created from hydropower, a process that uses water to drive water turbines connected to generators. There are many hydroelectric power stations around the world.

Water also plays a role in cooking. Steaming and boiling food are well known cooking methods. You may have noticed this last time you made pasta or noodles.

Water is also used for fun. Water sports are a very popular recreational activity and include things like swimming, surfing and waterskiing. Ice and snow is also used in ice skating, ice hockey, skiing and snowboarding.