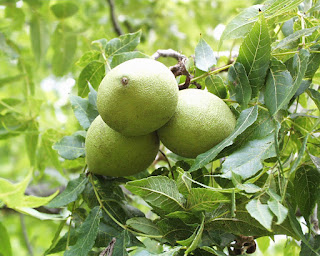 Walnut is a deciduous plant that belongs to the Juglandaceae family. It is native to Central Asia and Europe. Walnut grows in fertile soils, in areas that have sufficient moisture and direct sunlight. According to some researchers, walnuts have been part of the human diet for around 10,000 years. People consume 2.5 million tons of walnuts every year. Most of the walnuts commercially available come from California, the world's largest walnut producer. Walnuts are high in nutritional value and have a beneficial effect on human health. They are grown for their high quality wood, which is used in many industries.

When surrounded by other trees in the forest, black walnuts grow straight and tall with few, if any, lower branches.

Walnut tree can reach 40 to 60 feet in height and develop a crown of the same size.

Bark of walnut tree is smooth and greenish-brown when the tree is young. It becomes grey and covered with fissures when the tree grows old.

Black walnuts require a deep, fertile soil with a near-neutral or slightly acidic pH. They are pretty much disease-free and are threatened by few pests.

Walnut tree has feathery leaves that consist of 5 to 9 alternately arranged leaflets.

The English walnut, cultivated for many years in England, is now grown in parts of North and South America, both as an ornamental and for commercial nut production.

Walnut tree has strong and deep taproot. It produces chemicals (called juglones) which prevent growth of other plants in the close proximity to the tree.

The leaflets of native North American walnuts are largest toward the centre of the leaf, and have toothed margins.

The dark, fine-grained wood of English and black walnuts is used for furniture, panelling, and gunstocks.

The nut meat is widely used for baking and it is often used as additive in various confectioneries.

Walnut is known as “karyon” in Greek language, which means “head”. Name originates from the fact that walnut shell looks like a skull which protects brain-like kernel located beneath it.

The walnuts are the seeds of a drupe and can be eaten fresh or dried.

Due to high amount of oils in the kernel, walnut becomes rancid after exposure to the atmospheric oxygen. Brown shell delays this effect and keeps the seed fresh and tasteful.

Nut meat from English walnut tree is also used for producing walnut oil, which is edible.

Walnuts are rich source of vitamins A, E, K and vitamins of the B group and minerals such as manganese, magnesium, phosphorus and iron.

China, Iran, United States and Turkey are the world leaders in producing walnuts.

Walnuts can be consumed as snack, or as a part of various desserts and salty dishes.