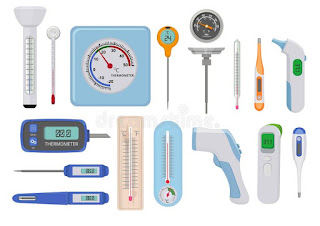 Thermometer is a tool that can be used to measure the temperature of a living and non living object. The first known attempt to measure temperature was made in 170 AD by a Greek doctor and scientist. Named Galen. It wasn't until the 16th century, when inventors like Galileo Galilei began working on the thermoscope, that instruments for measuring temperature were developed. In 1612, Santorio Santorio placed a scale on a thermoscope to measure human temperature. In 1654, Grand Duke of Tuscany Ferdinand II found a thermometer covered with alcohol in it. The first modern thermometer was invented in 1714 by Daniel Gabriel Fahrenheit, a German physicist who also discovered the Fahrenheit scale a decade later.

The invention of thermometer has proven to be one of the best events ever as it helped mankind observe elements and perform experiments more accurately. It also revolutionised medical science forever.

The invention of the thermometer is generally credited to the Italian mathematician-physicist Galileo Galilei.

It is said that he kept the process of making thermometers a secret for 18 years. Daniel Fahrenheit's first thermometers' auction price was USD 107,802 at Christie's in London in 2012.

A thermometer measures how cold or hot something is.

The first lowest temperature for a thermometer was created by placing it in a mixture of ice, water and ammonium chloride.

The simplest thermometers are glass tubes that contain a liquid, usually mercury or alcohol, which expands with hat or contracts with cold. As the liquid responds to the heat or cold it moves up or down the tube and the temperature can be read from the scale.

Many thermometers have both Celsius and Fahrenheit scales for reading the temperature.

There are three popular scales of temperature measurement -- Fahrenheit, Celsius and Kelvin. The Fahrenheit unit is five-ninth of the same unit on the other two scales.

Band thermometers are often used on small children. The band thermometer is placed on a patient's forehead and it reads their temperature.

The Fahrenheit scale is mostly used in the United States, Cayman Islands, Bahamas, Belize and Palau. Other parts of the world prefer the Celsius scale.

Thermometers are used for a variety of purposes including for determining weather, for medical and scientific purposes, industrial and engineering uses, flight purposes, measuring water temperatures, and to help regulate and avoid disasters such as nuclear meltdowns.

Some scientists believe that a change in Fahrenheit unit is what an average human body can detect.

The absolute zero or the lowest temperature known to man is minus 459.6 degree Fahrenheit or minus 273.1 degree Celsius.

Registering thermometers are those that hold their temperature when moved to a new temperature until reset.

To change a temperature scale from Fahrenheit to Celsius, subtract 32 from the reading, multiply it by 5, and then divide it by 9.

Daniel Fahrenheit died on September 16, 1736 at the age of 55. He worked on an earlier invention of an alcohol-based thermometer, which was invented by Danish scientist Olaus Roemer.

The three major temperature scales for use in thermometers are Fahrenheit, Celsius, and Kelvin.

The "Boyce MotoMeter" radiator cap on a 1913 Car-Nation automobile, used to measure temperature of vapor in 1910s and 1920s cars.

Thermometers are used for determining the temperature in regards to weather. A thermometer can help people decide what to wear or what to expect from the weather. If it is very cold and raining drivers can be warned about the potential for freezing rain.

Thermometers can be used to help determine if a person is sick because it can measure whether a person has a fever. The human body is usually 98.6 so if it measures higher the individual is considered to have a fever.

An infrared thermometer is a kind of pyrometer (bolometer).