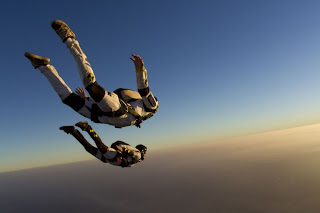 Parachuting, or skydiving, is an activity that involves jumping in a parachute from a high point above the ground to control descent and landing. The first parachute jump was made on October 22, 1797 by Andre-Jacques Garnerin, who jumped from a hydrogen balloon 3,200 feet above Paris. The parachute has no ripcord and is not packaged in a container. The first planned leap, triggered by rip cords, was in 1919 by Leslie Irwin. The military is eager to develop parachute and parachute technology to rescue their crew during emergency flights and allow soldiers to exit strategically during combat. Parachuting began in the 1930s and became an international sport in 1952.

Tandem skydiving gear is equipped with an automatic activation device (“AAD”). This device was designed by a German skydiver named Helmut Cloth in the early 1990s, when he lost a friend who was unable to manually deploy his parachute in time.

Skydivers usually jump from planes but they can also be completed from helicopters and hot air balloons.

Experienced skydivers will sometimes fly with weights to adjust their freefall speed so they can stay on-level with other jumpers in the sky.

When a skydiving student is attached to a professional skydiver for the duration of the jump it is referred to as tandem skydiving.

The highest population of skydivers ever to share the sky in a single formation was a whopping 400 people.

Tandem skydiving is a popular way for new skydivers to make their first jump.

Captain Kittinger recorded the highest skydive from a height of almost 102,800 feet, in 1960.

While freefalling the wind passes by at a speed of 100 miles per hour.

The youngest to accomplish the feat of skydiving was a four year old. The jump was a tandem jump (skydiving while being harnessed to a trainer), and was made from an elevation of 10,000 feet.

While skydiving it is impossible to hear other skydivers. Sometimes ears pop during the dive.

On 6th of February 2004, a group of 357 skydivers joined hands and stayed in that formation for 6 seconds in Takhli, Thailand. This was their 6th attempt.

There are approximately 3.1 million skydives around the world each year.

There are approximately 55 deaths from skydiving each year. This is equal to less than 1% of the total jumps making the sport safer than driving a car.

During freefall, the wind traveling past your ears is well over 100 mph.

Jay Stokes created a new world record when he completed 640 jumps in one day. Each jump took place less than two and a quarter minutes apart.

Jonas holds the record for getting the first tattoo while freefalling at a height of 4,000m in Sweden. He got a 'WFFT' tattoo made while skydiving with Nordin. WFFT stands for World's First Freefall Tattoo!

The most difficult group skydive took place in 2006 when 400 skydivers jumped from 23,000 feet and formed a flower arrangement in the sky.

The first woman to skydive with a parachute from a moving aircraft was Georgina Broadwick. She jumped over Los Angeles on June 21st, 1913.

The average number of fatalities is around 55 which is less than 1% of the jumps that take place.

The youngest tandem skydiver was Toni Stadler. He was only four years old when he jumped with Paul Lutge from 10,000 feet above the earth.

Some of the most daring skydivers include a 92 year old man sporting artificial knees, a hearing aid and weighing 105 pounds who leaped from 3,500 feet did a solo jump and a 90 years old woman who skydived from 12,000 feet to celebrate her birthday.

The oldest skydiver on record was at one time 100 year old Fred Mack. His first jump was at 95 and he swore if he lived to 100 he would repeat the jump, which he did.

In 2004 the oldest skydiver on record became Frank Moody who made a tandem jump at the age of 101.

The extravagant designer Adrian Ionel Haiduc, owner of the H'Art Design Ltd.jewerly company, launched his collection "Man's on Air" with the participation of 11 parachutists who launched from a plane wearing his creations.

Although it looks like it might hurt when the parachute opens they are designed to open slowly and there is little to no jolt and no pain.

3 skydivers including 2 Brittons, Leo Dickinson and Ralph Mitchell, and an Indian Air Force officer, Ramesh Tripathi, jumped from an airplane at 20,000 ft (6.1 km) and landed by parachute at Gorak Shep, a frozen lake bed, 16,940ft. (5.1 km) above sea level, near Mount Everest-setting the world for the highest parachute jump landing.

The lowest combat jump occurred July 3, 1944 at 175 feet, which was accidental due to an altimeter error. A total of two aircraft made the mistake. The lowest planned combat jump was from 250 feet in Crete.