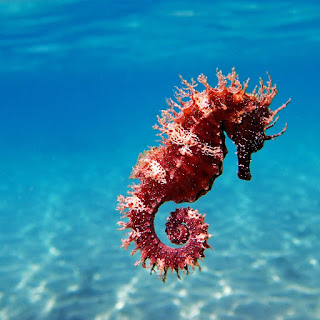 Seahorses are a type of sea fish that are easily recognized because of their specific morphology. There are 35 species of sea horse that live in tropical and subtropical waters around the world. Seahorses prefer shallow waters and are usually found near coral reefs, mangroves, or near algae. Many seahorse species are at risk of being overfished (seahorses are used in traditional Asian medicine). Other factors that have a negative impact on their survival are ocean pollution and global climate change, which reduces the number of coral species and changes in water temperature.

There are about 40 known species of seahorse.

Seahorses vary in size from 0.6 to 14 inches in length.

Seahorses prefer to swim in pairs with their tails linked together.

Seahorses have equine (horse-like) shape of the head, elongated body and curled tail. They do not have scales.

They swim upright and avoid predators by mimicking the colour of underwater plants.

Despite their specific body shape, seahorses have gills, swim bladder and fins, just like all other fish.

Except for crabs, few marine predators eat the seahorse – it is too bony and indigestible.

Color of the seahorse body matches with its environment. Some species change their body color under stress conditions or as a part of mating ritual.

Seahorses propel themselves by using a small fin on their back that flutters up to 35 times per second. Even smaller pectoral fins located near the back of the head are used for steering.

Seahorses hold a Guinness World Record as the slowest swimmers in the ocean. Dwarf seahorse swims 5 feet per hour.

Because of their body shape, seahorses are rather inept swimmers and can easily die of exhaustion when caught in storm-roiled seas.

Seahorse can move its fins 50 times in second, but that is not enough for efficient movement. On the other hand, they are quite maneuverable and able to move up, down, forward and backward.

Seahorse anchor themselves with their prehensile tails to sea grasses and corals, using their elongated snouts to suck in plankton and small crustaceans that drift by. The seahorse can suck up food from as far as 3cm away.

Seahorse can be easily moved away by the sea current because of its tiny structure and inability to swim fast. Luckily, it has a prehensile tail which allows it to grab a coral branch or sea weed and prevent current-induced movement.

The seahorse feeds constantly on plankton and tiny fish. It moves each of its eyes independently, so it can follow the activity of passing sea life without giving its presence away.

Seahorses eat plankton and small crustaceans. They do not have teeth and stomach and food passes quickly through their body. Seahorses are able to eat up to 3000 brine shrimp per day.

They can consume 3,000 or more brine shrimp per day.

Seahorses interact with each other by producing the clicking sounds. These sounds are also produced during meals.

Seahorses are monogamous and mate for life.

Some species of seahorses are monogamous (they mate for life), while other stay together only during a breeding season.

When mating, the female seahorse releases up to 50 eggs into a pouch on the male’s abdomen.

The best known fact about seahorses is that male carries the babies. Mating ritual is complex and it involves dancing when seahorses intertwine their tails and move around tangled. It may last for hours.

The male seahorse carries the eggs in his pouch until they hatch, then releases fully formed, miniature seahorses into the water.  As little as 5 or as many as 1,500 young can be born.

Male seahorses have a pouch on the front side of their body. When female deposits her eggs inside the pouch, male fertilizes them internally. Male can carry up to 2000 babies at the time.

Seahorses have no teeth and no stomach. Food passes through their digestive systems so quickly, they must eat almost constantly to stay alive.

Pregnancy lasts between two and five weeks. Young seahorses look like miniature versions of their parents.

Rarer still, they are among the only animal species on Earth in which the male bears the unborn young.

Only 1% of babies will live long enough to reach the adulthood.

Male pregnancy frees to female to make more eggs straight away and so reproduce quicker.

Lifespan of most seahorse species is between one and five years both in the wild and in the captivity.