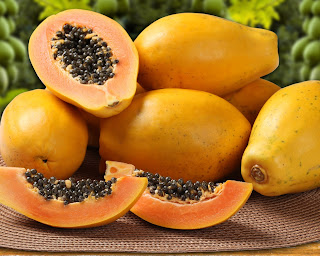 Papaya is a flowering plant that belongs to the Caricaceae family. This plant is native to Mexico and Central America. Papaya grows in tropical areas around the world. It grows in sandy, well-drained soil in areas that have direct sunlight and adequate moisture. Papaya has been an essential part of the human diet for hundreds of years. Apart from its high nutritional value, papaya also has positive effects on human health. Unfortunately, papayas are susceptible to viral, bacterial and fungal diseases which reduce the amount and quality of the fruit available.

The papaya tree can grow from seed to a 20 foot, fruit bearing tree in less than 18 months.

Papaya is a tree-like herb that can reach 16 to 33 feet in height.

The fruit can range in size from 1 to 20 pounds.

Leaves are green, large and divided in seven lobes. They are spirally arranged and located on the top of the plant.

The exact origination of papaya is unknown but it is believed to be native to southern Mexico and neighboring Central America.

Papaya develops white flowers with five petals. Flower can contain male, female or both types of reproductive organs. Type of flower depends on the variety and environmental temperature.

Fruit has yellow-green skin on the surface and orange-pinkish flesh underneath it. Large number of black seeds is located in the middle of the fruit.

The white powder sold as “Meat Tenderizer” is composed mainly of an enzyme extract from the papaya, called papain.

Hawaiian and Mexican papaya are two main types of papaya that can be purchased around the world. Hawaiian variety is pear-shaped and weighs one pound. Mexican papaya is heavier (weighs around 10 pounds) but has less intense taste.

There are two types of papayas, the Hawaiian and Mexican.

Papaya is rich source of vitamins C and vitamins of the B group. It contains beta-carotene which turns into vitamin A inside the human body. Besides vitamins, papaya contains numerous valuable minerals and high content of dietary fibers.

Most people only eat the sweet delicious flesh, but you can also eat the small, black seeds in the center of the fruit.

Papaya is mostly consumed raw. This fruit is popular ingredient of cooked meals such as stews and curries in certain parts of the world.

The seeds taste like black pepper. People in some countries use papaya seeds in place of black pepper corns.

Young leaves can be used for fresh salads or they can be boiled and prepared like spinach.

The skin of the fruit is green when unripe and orange when ripe, while the flesh is yellow, orange or red.

Black seeds of papaya have sharp, peppery taste. They are used as a substitute for black pepper in some countries.

Antioxidants, including the carotenoids found in papayas, can neutralize free radicals.

Since it has antiviral properties, papaya can be used in the treatment of Dengue fever (tropical viral disease). When used in medical purposes, papaya can be consumed raw or in the form of ointments and tables.

Harrison Ford was treated with injections of papaya due to injury of spine incurred during the filming of the movie Indiana Jones.

In one study, people with Alzheimer’s given a fermented papaya extract for six months experienced a 40% drop in a biomarker which indicates oxidative damage to DNA — and is also linked to aging and cancer.

Diet based on high quantities of papaya may change the color of the skin on the palms and soles in yellow. This medical condition is known as carotenemia. Color of the skin returns to normal as soon as papaya is eliminated from a diet.

The reduction in oxidative stress is attributed to papaya’s lycopene content and ability to remove excess iron, which is known to produce free radicals.

Unripe fruit and stem contain latex which may induce allergy in sensitive persons.

Research suggests that the lycopene in papaya can reduce cancer risk.

Stem and bark of papaya are used in the production of ropes.

Papaya is perennial plant that can survive around 20 years in the wild.

In a small study in older adults with inflammation and precancerous stomach conditions, a fermented papaya preparation reduced oxidative damage.