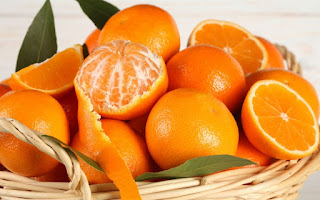 Orange is a citrus fruit that belongs to the Rutaceae family. There are more than 600 types of citrus trees found in tropical and subtropical regions of the world. Oranges come from Southeast Asia. Citrus cultivation began around 2500 BC. Oranges were introduced to Europe in the 15th century and soon after (late 15th and early 16th century) it was shipped to South America, which became the world's largest producer of citrus. Oranges are a very popular and healthy fruit. Oranges are used not only in human nutrition, but also in the manufacture of perfumes and cosmetics.

Oranges are the largest citrus fruit in the world.

Orange juice is the most popular fruit juice in America.

Leaves are oval in shape. They have fine, rounded teeth on the edges. Leaves are alternately arranged on the branches.

There are over 600 varieties of oranges.

Flower of the orange tree is white in color and it blossoms in spring.

Florida is the top orange producer in the United States.

Botanically speaking, fruit of orange tree belongs to the group of berries. It has peel on the surface which protects juicy flesh in the middle of the fruit. Flesh is usually divided in 10 segments. Size and sweetness of the fruit as well as the color of the peel and flesh depend on variety.

Spain has over 35 million orange trees.

Orange tree rarely reproduces via seed. It is usually propagated by grafting.

Almost 70 million tons of oranges are produced each year. Brazil is the largest producer of oranges. One third of commercially available oranges originate from Brazil.

With a high resistance to disease, more oranges are killed by lightning than by plant diseases.

Oranges are rich source of vitamin C, vitamins of the B group and minerals such as calcium, magnesium, potassium and phosphorus.

In Texas, oranges are in season from September to April.

Oranges can be consumed raw, in the form of juices, marmalade or as a part of various desserts. 85% of globally produced oranges are converted into orange juice which is often served with breakfast in the western societies.

Some research suggests that the vitamin C in oranges may be linked with a lower risk of certain cancers.

Due to high content of vitamin C, orange can improve immune system, facilitate absorption of the iron and accelerate wound healing.

Though oranges are relatively low in calories, eating several per day can end up leading to weight gain.

Orange peel contains fragrant oils that are used in the aromatherapy and industry of perfumes. Flower of the orange tree is used for the same purposes.

Orange peels are not poisonous, and as many cooks know, orange zest can pack a big flavor punch.

Petals of the flowers are used for the production of the orange flower water. This liquid is often used as flavor for desserts and baking goods in the Middle East cuisine.

Orange peels contain calcium, several B vitamins, and vitamins A and C.

Orange peel contains chemicals which repel pests such as slugs. Because of that, sliced orange peel can be used as natural pesticide in gardens.

Oranges originated around 4000 B.C. in Southeast Asia and then spread to India.

Dried leaves and flowers of orange tree can be used for the preparation of tea. Peel of bergamot orange is used for flavoring Earl Grey tea.

Oranges are a hybrid of the pomelo, or "Chinese grapefruit" (which is pale green or yellow), and the tangerine.

Sticks made of orange wood are used for pedicure and manicure.

The orange tree is a small tropical to semitropical, evergreen, flowering plant. It grows up to 16 to 26 feet (5 to 8 meters).

Orange tree can survive up to 50 years under appropriate climate conditions.

Renaissance paintings that display oranges on the table during "The Last Supper" are wrong. Oranges were not cultivated in the Middle East until sometime around the ninth century.