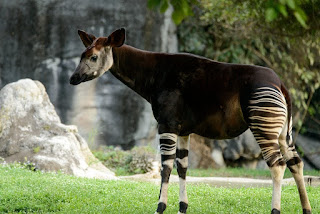 Okapi is the only surviving relative of the giraffe. This beautiful animal lives in the north, in the center, and in the east of Congo (Africa). Okapi prefers dense, moist vegetation and thus lives in tropical forests. Okapi was discovered in 1900 with 45,000 animals living in the wild. Intensive deforestation in the 20th century and high susceptibility to fungal, bacterial and viral infections reduced the number of Okapis to around 10,000. They are currently classified as "Near Threatened", meaning they could be easily endangered in the near future.

These animals are found in the African rainforest where trees are dense. They are native to the Democratic Republic of Congo and are typically found within the Ituri Forest, according to the Rainforest Alliance.

Females are larger than males. On average, okapi weighs between 440 and 700 pounds. They can be up to 6.5 feet tall and reach 8.1 feet in length.

Okapi are solitary and territorial.

Okapi has dark purple or reddish brown velvety fur, with white horizontal stripes on their front and hind legs.

On rare occasions, okapi join together to eat in small groups. During this time okapi may groom each other and play together.

Okapi slightly resembles to zebra because of the stripes, but it shares much more similarities with giraffe. It has long skull, large black eyes and very long, purplish tongue, just like giraffe.

They also eat twigs, buds, fungi, fruits and other vegetation that can be found in the rainforest’s understory.

Okapi's tongue is 18 inches long and it can reach both its eyes and ears.

Female okapis typically only give birth to one baby at a time.

Okapi's tongue is prehensile, which means that is used for stripping the leaves and buds from stems of various plants. Besides leaves, okapi eats fruits, grasses, ferns and twigs.

Okapi is mostly active during the afternoon and in the early evening. It often travel 0.5 to 2.5 miles per day while searching for food.

Calves can walk 30 minutes after birth. They don’t defecate until they are between four and eight weeks old, according to the San Diego Zoo.

Okapi is a ruminant, just like cow. It swallows and regurgitates its food for additional chewing several times.

Only male okapis have horns which are covered with skin. Females have bumps on their head instead of horns. Horns are short to prevent tangling with dense vegetation in the rainforest.

The common ancestor of the okapi and giraffe lived about 16 million years ago. This ancestor, known as Canthumeryx, had an elongated neck, according to a 2015 study published in the journal Royal Society Open Science.

While the giraffe ancestors' necks lengthened over time, the animals on the okapi side developed shorter necks.

Leopard is the only natural enemy of the okapi in the wild.

The okapi wasn’t discovered by Western scientists until 1900, according to the Rainforest Alliance.

Okapis are solitary and territorial animals. They produce tar-like substance and release urine to mark their territory.

Okapi have thick, oily fur that keeps them dry when it rains.

Female okapi vocalizes when she is ready for the mating. Males and females spend few weeks together, which is enough for females to become pregnant.

In addition to being a great utensil for eating, their tongue is also used for grooming. It is so long they can reach their eyes and ears with it.

Pregnancy lasts between 14 and 16 months and it ends with one calf. Young okapi looks like an adult animal, except it has a fringe of hair along its spine. It disappears at the age of one year.

Okapi stripes are sometimes called “follow me” stripes, as the bold pattern makes it easy for a calf to follow its mother through the dark rain forest.

Calf spends first few weeks of its life hidden in dense vegetation. It does not defecate for the first 4 to 8 weeks because it is too weak and it can be easily detected (sniffed out) by predators.

The ears of an okapi can rotate independently, so the animal can listen for sounds both in front and behind.

Average lifespan of the okapi is between 20 and 30 years.