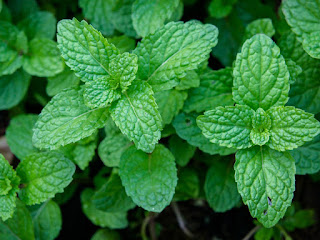 Mint is an herbaceous plant that belongs to the Lamiaceae family. This plant is native to Europe, Asia and Africa. Mint grows in temperate climates, usually in moist soil in an area that gets enough direct sunlight. Mint has been a part of the human diet since the Roman Empire. Aromatic chemicals and essential oils extracted from mint leaves are widely used in the cosmetic and medical industries. Mints are sometimes classified as an invasive species because they reproduce quickly and find new habitats easily.

Mint gets its name from Menthe a Greek mythical character.

Mint is small plant that can reach 4 to 47 inches in height. Stem is square-shaped and divided in nodes.

Mint comes in over 30 varieties.

Leaves of mint can be dark green, grayish-green or purple in color. They have lanceolate shape and serrated edges. Leaves are grouped in pairs that are oppositely arranged on the stem.

Flower can be white or pink in color. Individual flowers are grouped in cymose inflorescence scientifically known as verticillasters (false whorls).

Ancient Hebrews used to scatter mint over the synagogue floor for its scent.

Mint produces fruit called nutley which contains one to four seeds. Propagation via plant cuttings is more common compared to the reproduction via seed.

The common garden mint is spearmint.

Name “minthe” originates from Greek mythology. According to the legend, Hades’s wife Persephone turned river's nymph Minthe into herbaceous plant after she discovered that Hades is in love with her. Since Hades couldn't reverse the spell, he added beautiful smell to a newly created plant. That way, thanks to Hades, mint spreads magnificent odor when people walk across her.

The term "mint" is an umbrella term for the Mentha plant family that includes spearmint, peppermint, orange mint, and more.

Leaves contain compounds called pulegone and menthol which are responsible for characteristic aroma of the plant and cooling effect that mint produces.

Apple mint, spearmint and peppermint are the most popular varieties of mint that are cultivated worldwide.

Mint is rich source of vitamins A, C and B2. It also contains valuable minerals such as calcium, copper and magnesium.

Mint has been found in Egyptian tombs from as far back as 1000 BC!

Fresh or dry leaves of mint are used in the preparation of various sweet or salty dishes.

The US produces 70% of the Worlds peppermint and spearmint.

Mint is widely used in the confectionery industry for the production of cookies, chocolates, candies and chewing gums.

For millennia, mint has been used as a symbolism of hospitality.

Mint leaves are inevitable ingredient of popular mojito cocktail. Leaves are also used in the production of mint-flavored liqueurs.

In ancient Greece, mint was rubbed on tables to welcome visitors.

Essential oils and menthol extracted from the mint leaves are used in the manufacture of toothpaste and mouthwashes.

In the Middle East, mint tea was and still is offered to guests upon their arrival.

Mint leaves are used in aromatherapy and in the cosmetic industry for the production of various creams, lotions, perfumes and shampoos.

Most mint is native to Europe and Asia, but some species are indigenous to the Americas.

Mint is used in traditional medicine mainly for the treatment of painful stomach and chests. It can also relieve respiratory difficulties and skin burns because it produces cooling effect. Therapeutic effect is often achieved after consumption of mint tea. Besides its healing effects, mint is popular and often used for whitening of teeth.

There are over 600 types of mint plants, which include pineapple mint, apple mint, orange mint, water mint and horse mint.

Most species of mints are perennial plants which mean that they can survive more than two years in the wild.

Peppermint is known as the sweet mint, it's the one you'll find in candy, gum, teas, jellies, syrups, ice cream and other confections.