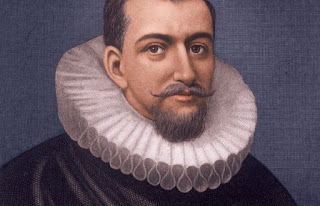 Henry Hudson was an English explorer and captain who lived from 1565 to 1611. He had attempted to find a northern route from Europe to Asia, and although he did not find one, he did explore three waterways in North America that were named after him including the Hudson Strait, Hudson Bay and the Hudson River. Henry Hudson was born in London, England in 1565 to a wealthy family. Not much is known about his early life but in 1607 he was chosen to captain a voyage to find a northern route to Asia, the first of several voyages the explorer would take before his final voyage in 1611.

It is believed that Henry Hudson attended Harvard University.

The Muscovy Company hired Henry Hudson in 1607 to head the voyage to search for a North Pole passage to Asia. His ship was called the Hopewell.

On his first voyage Henry and his crew, including his son John, reached Spitsbergen off Greenland's coast. Ice flow forced him to turn around and return to England.

Henry Hudson reported seeing whales on his first voyage. The whales would become hunted by whale traders in whaling ships after hearing of Henry's discovery.

Henry Hudson and his crew tried again in 1608 but were turned around again due to ice.

Henry Hudson set out again in 1609 hired this time by the Dutch East India Company. His ship was called the Half Moon and he had a crew of 20. The cold weather forced them to turn south toward North America. During this expedition he traveled on the Hudson River on this journey.

In 1610 Henry Hudson was provided with a ship called the Discovery by English merchants. During this voyage he reached Hudson Strait and Hudson Bay.

Henry Hudson thought Hudson Bay was the Pacific Ocean and sailed to its southern end, James Bay. Ice again was his enemy as he and his crew was then forced to spend the winter there. They were plagued by hunger, cold and illness.

In spring, 1611, Henry Hudson, his son John, planned to find an outlet from James Bay. His crew turned on him.

Henry, John and seven of Henry's loyal crew were sent out in a small boat and none of them were ever seen again.

The crew that turned on henry Hudson and sent him and his son and the seven crew members to their deaths on the small boat were never punished. They were found not guilty in a trial in 1618.

No search was ever sent to look for Henry Hudson.

Henry Hudson and his crew were the first Europeans to spend the winter in Canada's arctic region.

Henry Hudson's name has been used for many more places and things than Hudson River, Hudson Strait and Hudson Bay. His name also appears on towns, bridges, schools, and even the famous company the Hudson's Bay Company.

Henry Hudson was unable to obtain backing from London and signed a contract with the Dutch United East India Company on January 8, 1609.