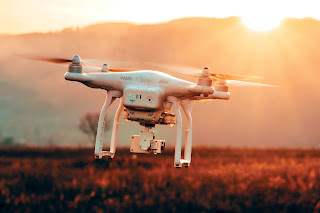 Drones, also known as unmanned aerial vehicles (UAVs) are a type of aircraft that does not carry a pilot. They are controlled by a ground-based controller, or by an onboard computer. Originally they were designed to replace humans on missions that were considered too dangerous, or not appropriate for human pilots. They were mostly used for military purposes when they were first invented but today they can be seen in use for other purposes as well, such as for scientific research, agricultural use, recreational use, commercial use, and for surveillance, police work, peacekeeping missions, racing, and for illegal activities such as smuggling.

These devices first came to the market in the 1990s and were developed by the military.

Prior to the use of drones in photography, photographers often used cameras on kites to capture shots from the sky.

Drones were invented because they are needed in small spaces where a normal helicopter can’t go or in war zones where it is too dangerous to send pilots.

There is a program in place in Africa and Asia that uses drones to help catch poachers.

When it comes to constitutional rights, using drone footage is not a violation. The police have the right to use footage from a crime scene if it was done by a drone. The only time they can’t use it is when it is a restricted area.

Drones are banned in all National Parks in the United States after a tourist used a remote control drone and crashed it into a hot spring in Yellowstone National Park.

While there are lightweight drones that can only stay in the air for a few minutes, most military or high-end drones can hover for an hour or two.

There is a program in Holland to train eagles to fight drones.

While there are a lot of expensive drones which offer a multitude of features, manufacturers also provide small, lightweight drones which are less than $100.

American Predator drones being used in Iraq had their video feeds interrupted by insurgents using a program called SkyGrabber that cost only $23.

An ambulance drone was created by students that carries medical supplies and both a camera and a speaker so that it can reach the injured person and tell them what to do.

Nowadays, drones are even used to record important events such as sports games, concerts, and festivals.

It is estimated that there will be more than 20,000 drones in the sky in the United States within 15 years.

The U.S. military uses drones a lot. It is estimated that roughly 30% of their aircraft are drones.

The first drone killing was in 2001 when UAVs shot Muhammed Atel, an Al Qaeda commander.

The first time drones were used in combat was in the Iran-Iraq war in the 1980s.

The United States built the first drone before the 9/11 attacks, but it was not ready for deployment.

Fighter aircraft that is no longer suitable for military use is now being used as target practice for drones.

The first country to manufacture drones was Israel. Israel Aerospace Industries has production facilities about 24 countries around the world.

There is a hummingbird drone that could be mistaken for the real thing. It carries a camera and takes an AA battery.

According to the Federal Bureau of Investigation, attack drones have killed about 4756 people. Many were children.

The Aerial Target made my A.M. Low, was one of the first attempts at putting a UAV together.

There are drones the size of insects that are used to search for victims of natural disasters and other catastrophic events.

Over 181000 Americans have registered their drones with the Federal Aviation Administration of America. Stores report selling over 400000 drones.

One week prior to 9/11, the first armed predator drone flights began.

Drones are believed to have been invented by Nikola Tesla, a famous inventor from Croatia born in 1856.

In 2000 a US drone spotted a man that looked like Bin Laden but because the drones were not armed back then they could not attack.

Drones are used to deliver life-saving medical supplies to very remote regions in countries such as Africa.

Farmers can use drones to check on the condition of their crops and help determine which areas are ready for harvest.

Because drones are becoming so popular for recreational and consumer use, there is now a drone racing league.

Police are using drones for surveillance and drug busts, however the legality of their use is in question due to warrant issues.