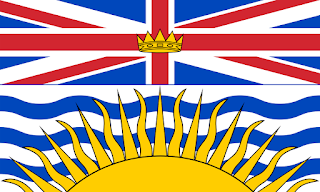 British Columbia is the third largest and most westerly province in Canada and it is four times the size of Great Britain. The length of BC’s coastline is over 27,000 kilometres.

European Captain James Cook was the first to explore Vancouver Island. The first to map the island was George Vancouver.

Half of all British Columbians live in the metropolitan area of Vancouver.

Alexander MacKenzie, David Thompson, and Simon Fraser were the first to explore the interior portions of British Columbia.

The original residents in British Columbia, prior to the arrival of explorers, were First Nations people including the Tlingit, Shuswap, Chilcotin, Haida, and Sekani tribes.

Two-thirds of British Columbia’s land base (we’re speaking of an area larger than France!) is forest land, and more than half of that area has had little or no human contact.

British Columbia became the 6th province of Canada on July 20th, 1871 when it joined the confederation.

Among all provinces and territories of Canada, British Columbia has the mildest climate. It has the longest frost-free periods of Canada and flowers often start blooming as early as February.

The provincial mammal of British Columbia is the Kermode Bear - a white colored black bar - which is very rare. It is also referred to as the Spirit Bear.

British Columbia is one of the top 3 producing regions of cranberries and blueberries in the world.

British Columbia is home to 25% of all of the black bears in Canada and 25% of the grizzly bears in North America.

BC is home to the world’s largest hockey stick! It was originally created for the Expo 1986 and then acquired by the city of Duncan, BC, where it is on display today.

British Columbia's provincial flower is the Pacific Dogwood. The provincial tree is the western red cedar.

BC resident Sarwan Singh who lives in the City of Surrey in the south of BC holds the world record for “Longest Beard” on a living male. It measures over 2.33 metres.

There is a tree on Meares Island in British Columbia believed to be as old as 2000 years. It is called the Hanging Garden Tree.

Actress Pamela Anderson was born on July 1st, 1967, in Ladysmith, BC, on Vancouver Island. She was the first child born in Canada on the 100th celebration of Canada Day (4:08 am), and was therefore named Canada’s “Centennial Baby”.

British Columbia is a popular and growing wine region. It is also a top three producer of blueberries and cranberries in the world.

BC’s capital city Victoria, located on Vancouver Island, has an annual flower count at the end of the winter. Each year the community gets together to count more than one billion blooms.

It is estimated that more than 50% of the residents in British Columbia live in Vancouver's Metro area.

British Columbia covers about 10% of the land area of Canada.

The wettest city of Canada is Prince Rupert on the west coast of British Columbia. With an average of 239.7 days of rain per year and a total amount of 2593.6 mm of rain per year, it was given this title by The Weather Network.

British Columbia's largest provincial park is Tweedsmuir Park. It is 989,616 hectares in size.

Vancouver Island is also home to the highest waterfall in Canada. The Della Falls in Strathcona Provincial Park are 440 metres high, which is more than eight times the height of Niagara Falls.

British Columbia is so large that only 30 countries in the world are larger than the province.

“The Hanging Garden Tree” on Meares Island close to Tofino is one of the oldest known western red cedars and is estimated to be between 1,500 and 2,000 years old.

British Columbia has many sasquatch sightings, the first dating further than 200 years ago.

Between 1917 and 1921, alcohol was prohibited in British Columbia.

British Columbia's longest river is Fraser River. It is 1,399 km in length. In 2012 a 500kg sturgeon fish was caught by rod, and released in the Fraser River.

Nanaimo, a coastal city on Vancouver Island, is the Bathtub Racing capital of the world. The first race took place in 1967 to showcase Nanaimo to the world and contestants are required to use a bathtub boat.

British Columbia is the only Canadian province that shares two borders with the U.S.

Whistler is home to the longest unsupported cable car in the world. It connects the two peaks of the Whistler Blackcomb ski resort, one of the best resorts in North America for skiing and snowboarding.

It is estimated that half of the residents of BC are not native English speakers. Chinese is the second most common language in British Columbia, following English.

There are many people living in British Columbia in areas not serviced by the power grid, and they rely on solar, wind, and sometimes generators for their hydro.