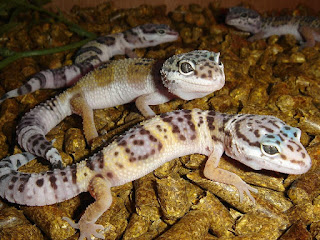 The gecko is a species of lizard from the gecko family, Gekkonidae. There are 1,000 species of geckos found worldwide except Antarctica. Different species of gecko have developed different adaptations to survive in various ecosystems, such as rainforests, deserts, forests, grasslands and mountains. Geckos are often kept as pets. The leopard gecko is the most popular pet of the gecko. Some gecko species are threatened by habitat loss and the introduction of new predatory species into their environment.

Geckos make clicks, chirps, barks, and other sounds to communicate with fellow geckos.

Some species of geckos have no legs and look more like snakes.

Geckos are usually brightly colored. Body coloration depends on the colors of their environment because it plays important role in the camouflage.

Geckos also drop their tails as a response to stress, infection, or if the tail itself is grabbed.

Geckos are nocturnal (active at night) creatures. Their eyes are adapted to a low level of light.

Geckos use their tails to store fat and nutrients for lean times. Because of this, for many species a plump, well-rounded tail is a good way to gauge the individual gecko's health.

Besides well developed night vision, geckos have excellent sense of hearing which help them detect and avoid predators on time.

Geckos range in life span depending on the species, but many will live around five years in the wild.

Due to their small size, geckos are often preyed by snakes, birds, mammals and some large spider species.

In captivity, a well-tended gecko can live between 10 to 20 years.

Leopard geckos average between 15 to 20 years, though the longest lived individual is recorded at 27 years old.

Gecko has a fat tail which is used as a reservoir of fats. It also help gecko to balance while it walks and climbs the trees.

Most species of gecko don’t have eyelids, so they lick their eyes to clean them.

Just like other lizards, gecko can throw away its tail in the case of a danger. Tailless gecko will regenerate its missing body part after short period of time.

Unique feature of some gecko species is ability to walk across smooth or even horizontal surfaces (such as ceilings) without falling. This is possible because their toes have tiny hooks which act like suction cups during walking.

Teflon is the only material to which gecko cannot stick (using its "suction cups") and walk without gliding.

The Jaragua sphaero, or dwarf gecko, is one of the world's smallest reptiles. It measures less than 2 centimeters in length.

Flying gecko is the only gecko species capable for flying (gliding through the air). It has webbed feet and tail, and wide flap of skin which act as a parachute while gecko jumps from one tree to another.

Geckos are found on every continent except Antarctica, and live in almost every habitat, including rain forests, deserts and mountains, according to National Geographic.

Unlike other reptiles, geckos are able to produce various sounds which are used in communication. They produce barking, chirping or clicking noise during mating season or when defending their territory.

Geckos have skin covered with hundreds of thousands of hair-like spines.

Female lays her eggs under the leaves and bark few weeks after mating. She does not take care of the eggs. Some eggs are soft, but their shell gradually hardens when exposed to air.

Geckos give birth by laying eggs.

The sensitivity of the helmet gecko eye has been calculated to be 350 times higher than human cone vision at the color vision threshold.

The female geckos can be pregnant with her eggs for years before she lays them.

Geckos have long lifespan. Leopard gecko can survive more than 20 years in captivity. Other species live between 8 and 10 years.

Geckos are listed anywhere from least concern to endangered, depending on the species, according to the International Union for Conservation of Nature (IUCN) Red List. For example, the Bavayia goroensis is endangered.

According to a 2009 study of the helmet gecko, “Tarentola chazaliae, discriminates colors in dim moonlight when humans are color blind.

According to a study published in the journal the Proceedings of the National Academy of Sciences, when a gecko falls, it twists its tail to a right angle to enable it to land on its feet. This stunt takes 100 milliseconds.