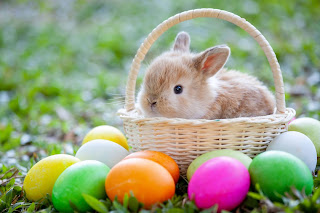 Easter, a Christian holiday, celebrates the resurrection of Jesus Christ, which occurred on the third day after his crucifixion. Forty days before Easter, Christians attend Lent, which is said to be 40 days of prayer, repentance and fasting. The last week of this 40 day period is called Holy Week. The Last Supper takes place during Holy Week, Holy Thursday. Good Friday marks the crucifixion and death of Jesus. After Easter is a 50 day period called Easter which ends on Pentecost Sunday.

The origin of the Easter Bunny dates back hundreds of years, beginning in pre-Christian Germany. Here, the hare was said to be the symbol of the Pagan Goddess of Spring and Fertility.

Easter is not fixed to a specific day. It usually falls between March 22nd and April 25th. It is supposed to fall on the first Sunday after the full moon following March 21st.

The holiday was named after the Anglo-Saxon Goddess, Eostre.

The man who betrayed Jesus Christ, which led to his crucifiction was Judas Iscariot.

The Birmingham factory produces 1.5 million Creme Eggs every day, and the Creme Egg is the most popular egg-shaped chocolate in the world.

When Jesus was resurrected it proved he was the Son of God.

Ukrainians have been decorating eggs as a calling out to the Gods and Goddesses of health and fertility.

Jesus' death was symbolic in that he was dying for our sins.

The world’s largest Easter egg weighs in at 5000lbs. Standing at 31ft tall and 18ft wide it is found in Vegreville, Alberta, Canada.

Pretzels are associated with Easter because the twists resemble arms crossing in prayer. From the 1950s, it was tradition for Germans to eat a pretzel and a hard-boiled egg for dinner on Good Friday.

Decorating Easter eggs was traditionally a symbol of the empty tomb. This tradition is called Pysanka. Christians believe that Easter eggs symbolize new life and resurrection.

In Germany, it is illegal to dance on Good Friday.

Eggs were a symbol of life to Ancient Egyptians, Persians, Romans and Greeks. The custom of giving eggs at Easter originated with them.

Easter is celebrated on the Sunday after the full moon following March 21st.

During Lent, people did not wear fine angels; instead they wore Easter bonnets.

In 2007, an Easter egg sold for £9 million. It was sold at Christie’s in London. The egg was made by Karl Fabergé in St Petersburg in 1902 and is the second largest egg ever made by Fabergé.

The White House holds an annual Easter egg hunt on the front lawn. This tradition began in 1878 with President Rutherford B. Hayes.

Eggs are dyed to represent the blood of Jesus Christ.

In 1981 the White House began to use wooden Easter eggs so they could be kept as keepsakes.

Good Friday is recognized as a holiday in only 12 states.

Easter is the oldest Christian holiday.

Approximately $14.7 billion is spent every Easter, with an average of $130 for each home. 120 million pounds of candy are sold at Easter. Approximately 75% of people will eat the chocolate bunny's ears first.

Easter and Halloween often compete for the highest candy sales every year.

Over 16 million jelly beans are eaten on Easter in the United States. This is enough jelly beans to circle the earth three times.

The biggest chocolate bunny was created by an artist in South Africa in 2010. It weighed 3 tons and stood at 12 feet.

Around 90 million chocolate bunnies are sold for Easter.

Lilies are a flower often associated with Easter (Easter Lilies). The petals face downward, which is in honor of Jesus.

Wearing new clothing on Easter is said to bring good luck for the coming year.

Some European countries follow a tradition of burning Easter fires, which represent fertility.

Members of the Greek Orthodox faith often paint their Easter eggs red, which symbolizes Jesus' blood and his victory over death. The color red is symbolic of the renewal of life, and as such, Jesus' resurrection.