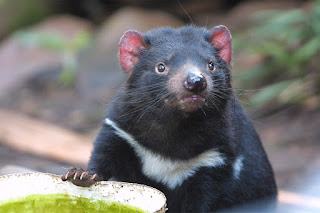 The Tasmanian Devil is estimated to have become extinct on the Australian mainland around 400 years ago and fossils have been found that prove this.

Tasmanian devils look like dogs of medium size. They can reach 30 inches in length and up to 26 pounds in weight.

They are the largest carnivorous marsupial in the world.

Prior to 1936, the largest carnivorous marsupial in the world was the thylacline, which is commonly know as the Tasmanian Tiger.

Tasmanian devil has one of the strongest bites in the animal world: 1200 pounds per square inch, which means that it can bite through the metal trap.

The thylacline is a distant relative of the Tasmanian Devil and was over the twice it’s size!

Tasmanian devil is a carnivore that can eat both live prey and the carcasses. Fish, snakes, birds and insects are often of the Tasmanian devil's menu. It is not a picky eater; once the prey is caught - Tasmanian devil will eat all of it, including bones and fur. These animals eat 5 to 10% of their own body weight each day.

They store fat in their tails.

Tasmanian devil has excellent sense of eyesight and smell, which are used for detection of the prey.

Tasmanian devil can eat up to 40% of their body weight in a day.

Tasmanian devil stores fat in the tail. Tail in the healthy animals is thick and swollen, while it is limp and skinny in the diseased animals.

A mother gives birth to around 20-40 Joeys at once.

Tasmanian devils are not very fast runners (they can reach only 15 miles per hour), but they can run extended period of time (one hour without resting). Also, they are excellent climbers and swimmers.

Joeys are born the same size as a grain of rice.

Tasmanian devils are named that way because of the ferocious behavior which they exhibit during eating and mating and because of the very loud screeching noise that they produce.

It is estimated that the tasmanian devil's bite is to be around 544 kg per square inch.

When threatened, Tasmanian devil will open its jaws widely to express fear and uncertainty. Also, in stressful situations, it will release pungent odor to chase away the predators.

Tasmanian devils are solitary creatures that often fight with other males for territory. Prior the fight, Tasmanian devil uses sharp sneezing sound to challenge the opponent.

Tasmanian devils are also incredible swimmers and can run at 24 km/h for up to an hour straight.

Breeding season of Tasmanian devils lasts from February to June. Females usually have four litters in their lifetime.

Pregnancy lasts three weeks, after which 20 to 30 pea-like babies crawl to their mother's pouch. Only several babies will survive because female have only 4 nipples to feed babies with milk.

“Sarcophilus harrissii” comes from the scientist Harris who described the Tasmanian Devil.

Babies spend their first four months in the mother's pouch, after which they can leave it. When they reach eight months, Tasmanian devils are ready to begin solitary life.

Rainforestation has the only captive tasmanian devils in Far North Queensland.

Tasmanian devils live between 7 and 8 years in the wild.