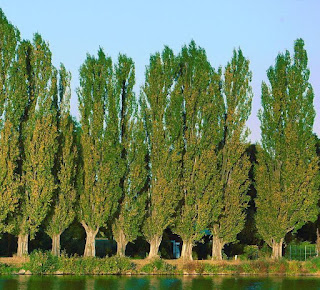 Poplar is a deciduous tree belonging to the Salicaceae family. There are about 35 species of poplar that vary in size, leaf shape, bark color, and habitat type. Poplar trees are found throughout the northern hemisphere (North America, Europe, Asia and North Africa). This tree mainly grows in temperate climates. Requires adequate moisture, direct sunlight and nutrient-rich soil. Poplars are common near rivers, lakes and swamps. People grow poplar wood because it grows fast, provides adequate shade, and the wood can be used for a variety of purposes. Some poplar species (such as the black poplar) are at risk of habitat destruction.

The size of the poplar tree depends on the species. They can reach 50 to 165 feet in height and up to 8 feet in diameter.

The name Populus refers to the fact that in Roman times trees were often planted around public meeting places.

The shape and size of the leaves can vary even with the same poplar. The leaves are mostly oval or heart-shaped with a fine serrated tip. They have flattened stems that ensure their leaves will vibrate even in the slightest wind.

Poplar wood is relatively soft, so it is commonly used to make cardboard boxes, boxes, paper, and veneers.

Poplar bark can be white, light green, brownish, or gray. It can be slippery (young tree) or covered with deep mountains (old tree).

Poplar grows quickly, but the tree is relatively short-lived.

Poplar trees develop a strong root system that can reach 130 feet in diameter. It can easily destroy sidewalks and sewers in urban areas.

Poplars are widespread in temperate northern regions and range from North America through Eurasia to North Africa.

The leaves of the poplar tree have alternating contours and are oval or heart-shaped with smooth to rough jagged areas (leaf edges).

The fruit of the poplar tree is green to reddish capsules that ripen in summer. Capsules contain a large number of miniature seeds.

Each seed is covered with long fine hairs that make it easy for the wind to spread out.

The name "poplar" comes from ancient Rome. In the 6th century, Romans planted poplar trees in areas where public gatherings were held. The Latin name for the people is "populus", hence the name.

Poplar wood is light and strong at the same time. Hence, it had been used as the perfect material to make battle shields in the past.

Poplar wood is widely used in the manufacture of plywood and pallets.

The two known species of poplar in Eurasia are white and black poplars.

Due to its high elasticity, poplar wood is the most important wood in the snowboarding industry. It is also used to make musical instruments such as guitars, drums, and violins.

Column-shaped black poplar trees are widely used in ornamental landscapes, especially in villas in Italy and elsewhere in southern Europe.

Poplar wood is grown as an energy crop which is used as biofuel because it grows fast.

White and black poplar trees are common in the eastern United States and Canada.

Poplar wood is used to paint the panels. One of the most popular paintings of all time - the Mona Lisa - was painted on a poplar tree.

Balsam poplar, a plant native to marshlands in North America, is well known for its fragrant resin buds.

Poplar is very important and widely used in the paper industry.

The western balsam poplar grows to about 60 meters high and is one of the largest deciduous trees in northwest North America.

Poplar can last less than 50 years.