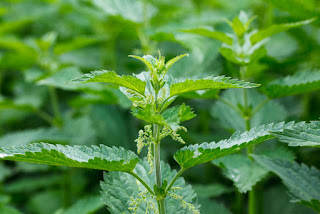 Common nettle, also known as stinging nettle, is herbaceous plant that belongs to the family Urticaceae. There are 6 subspecies of common nettle that are native to Europe, Asia, North Africa and North America. Common nettle can be found in numerous habitats including forests, grasslands, marshes, farms, gardens and urban areas. Even though most people associate common nettle with pain, this plant has numerous beneficial properties that are widely exploited by humans.

Nettles need phosphates in the soil in order to thrive. This is why they grow so well near where humans live, with our phosphate-rich rubbish dumps and livestock paddocks.

Common nettle has wiry stem that can reach 3 to 7 feet in height.

Nettles have evolved stings to prevent them being eaten by animals.

Common nettle has green leaves that are deeply serrated on the edges. Leaves are oppositely arranged on the stem.

Despite their stings, nettles have for a long time provided a source of food for humans in the form of soups, broths and teas.

Common nettle is attached to the ground via yellow rhizome. Each year, new stem develops from the underground rhizome at the beginning of the vegetative season.

Nettles are also used as a fibre to make string and cloth.

Latin name for common nettle is "Urtica dioica". Word "dioica" means "two houses" and it refers to the male and female plants (each plant possesses either male or female reproductive organs).

The plant can spread vegetatively with its yellow creeping rhizomes and often forms dense colonies.

Common nettle is best known for its needle-like hairs that cover leaves and stem. Each hair ends with swollen base that contains mix of chemicals. These chemicals are responsible for the burning sensation that results from touching of common nettle.

The toothed leaves are borne oppositely along the stem, and both the stems and leaves are covered with numerous stinging and non-stinging trichomes (plant hairs).

Large herbivores avoid common nettle because of its sharp and poisonous hairs. On the other hand, many insects and their larvae use common nettle as food and safe place for egg deposition.

Common nettle is used in folk medicine as a remedy for rheumatism and gout. Placing of fresh plant on the painful joint can alleviate pain.

The tiny green or white flowers are borne in dense whorled clusters in the leaf axils and stem tips and are wind-pollinated. The fruits are small achenes, and the plants produce copious amounts of seeds.

Common nettle can be used in treatment of urinary tract infections, disorders of gastrointestinal tract, skin and cardiac diseases, hemorrhage and flu.

The stinging trichomes of the leaves and stems have bulbous tips that break off when brushed against, revealing needlelike tubes that pierce the skin.

Common nettle is used in cosmetic industry mostly in the production of shampoos. Shampoos made of common nettle are used to remove dandruff and to improve quality of hair.

Hunting dogs running through stinging nettle thickets have been poisoned, sometimes lethally, by the massive accumulation of stings.

Common nettle was used in the production of fabrics in the past (before cotton was discovered). Certain countries produce textile made of common nettle today, because it is cheap and has good characteristics.

The dried plant can be used as livestock feed, and heating or cooking the fresh leaves renders them safe for consumption.

Common nettle is rich source of iron, vitamin A and C, and few minerals. It can be consumed in the form of soups, salads or as an ingredient of various salty dishes.

Stinging nettle has a long history of use as a medicinal herb and is still used in folk medicine for a wide array of disorders, though there is limited clinical evidence supporting its efficacy.

Common nettle is also used for the manufacture of sweet non-alcoholic beverage and beer in Europe.

The rootstock is used as a diuretic and as an herbal treatment for benign prostatic hyperplasia (prostate enlargement) and other urinary disorders.

Common nettle contains high level of valuable minerals and it can be used as manure for gardens.

Tea made from the leaves has been used to treat hay fever, diabetes, gout, and arthritis, and fresh stinging leaves are sometimes applied to arthritic joints in a process known as urtification, which is said to stimulate blood flow.

Dyes extracted from the rhizome (yellow) and leaves (green) are used for dyeing of fabrics and food.

Topical creams have also been developed for joint pain and various skin ailments, including eczema and dandruff.

Common nettle is perennial plant, which means that it can survive more than two years in the wild.