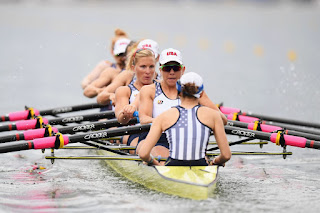 Rowing dates back to Egyptian times, but as a competitive sport, its origins date back to the early 18th century, when races were held on the River Thames in London, England. The rowing, or 'crew', as it is often known in the United States. , is a sport in which a boat is propelled through the water through the use of oars. Today, rowing is for sporting or competitive purposes. There are two forms of rowing = sweep or rowing and rowing and rowing. The rower has a paddle and this shape is usually done in pairs, fours, and eights. When paddling, each paddler has two paddles and this shape is usually done in quads, doubles or singles.

The women's eight victory in 2016 at the Olympics extended its world-title winning streak to 11 consecutive years.

In the modern Olympics, rowing was one of the original sports.

The founder of the modern Olympics Baron Pierre de Coubertin was a rower.

At the 2012 London Olympic Games, the U.S. women's eight won gold for a second consecutive Olympics. At the Paralympics, the U.S. won bronze in the trunk and arms mixed double, a first in U.S. history.

The first intercollegiate sport in the United States was rowing and the first competitive race was held in 1852 between Yale and Harvard.

The first rowing club in the United States was founded in 1839. It was called the Detroit Boat Club.

In 1999, the U.S. men's eight won its third consecutive gold medal at the world championships, a first in U.S. history.

The famous baby doctor and author Dr. Benjamin Spock won a gold medal in 1924 in the men's eight Olympics for rowing.

In 1997, Jamie Koven became the first American to win the men's single sculls at the world championships since 1966.

In rowing boats the long thin boats they use are called shells.

Dr. Benjamin Spock, the famous baby doctor, was an Olympic rower in 1924 and won a gold medal in the eight. Gregory Peck rowed at the University of California in 1937.

The coxswain is the in-the-boat coach responsible for carrying out the training or race plan, and he or she is also responsible for motivating the rowers and calling out information. They are usually petite individuals, but if they are too petite they must carry sandbags to bring them up to minimum weight.

FISA, the first international sports federation, was founded in 1892.

The rigger on the shell is the name of the apparatus sticking out at each seat that keeps the oar in place.

Yale College founded the first collegiate boat club in the U.S. in 1843.

The world's largest annual regatta is Head of the Charles.

The biggest spring season regatta is the Stotesbury Regatta in Philadelphia.

The most difficult and most important seat in the boat is the stroke, as the person sitting there is responsible for setting the tempo and determining the speed of strokes.

The first rowing club in the U.S. was the Detroit Boat Club, founded in 1839.

The middle seats are usually reserved for the strongest and largest rowers in the boat to improve the boat's balance.

Singles may be as narrow as 10 inches across, weigh only 23 pounds, and stretch nearly 27-feet long.

The usual distance for a race is 2000 meters, although some high school sprints are only 1500 meters.

Rowing was the first intercollegiate sport contested in the United States. The first rowing race was between Harvard and Yale in 1852.

Eight-oared shells are about 60-feet long – that's 20 yards on a football field.

Single shells are usually 27 feet long and are often only 10 inches wide.

Rowers are the third largest U.S. delegation (48 athletes) to the Olympic Games.

In competitive rowing there are usually two weight classes, lightweight and heavyweight.

Physiologically, rowers are superb examples of physical conditioning. Cross-country skiers and long distance speed skaters are comparable in terms of the physical demands the sport places on the athletes.