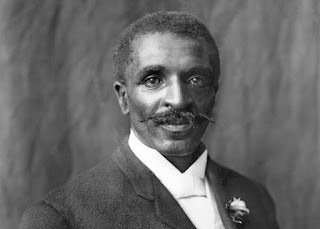 George Washington Carver was an African American inventor, chemist, botanist, and scientist best known for the many products he invented from peanuts. George Washington Carver was born as a slave in Diamond Grove, Missouri, in 1864. He was one of Giles' 12 children. His teacher Moses Carver raised George and his brother James after the abolition of slavery and encouraged him to receive an education. At age 13, George moved to Fort Scott, Kansas to attend school. He left after witnessing the murder of another African American and eventually graduated from high school in Minneapolis, Kansas. He graduated from Iowa State Agricultural College and continued until he received his master's degree.

When George was one week old he was kidnapped along with his mother and one sister by Arkansas raiders. Only George was recovered by Moses Carver.

Many people think that George Washington Carver invented peanut butter, but contrary to popular belief peanut butter was around centuries before he was around. He did help popularize the food.

Moses Carver and his wife treated George and his brother James like their own children and taught them to read and write.

In addition to being an excellent scientist and inventor, Carver was also an accomplished pianist and painter. His artwork was exhibited at the World’s Fair in 1893.

George had to move away from the Carvers because the schools in his area were not open to African-American children.

George Washington Carver was the first African American to have a national park named after him. You can visit the park and his monument in Missouri.

George applied to Highland College but was rejected because of his race.

George Washington Carver studied piano and art at Simpson College in Iowa in 1890.

Carver was one of the most prominent African Americans of his time and well-recognized for his work in plant research.

George attended Iowa State Agricultural College. He earned his B.S. and his master's degree at the school. He was the first African-American student to attend the school.

ot only was Carver skilled in finding uses for peanuts, he also found new ways to use Alabama clay and sweet potatoes.

George Washington Carver earned fame for his work at the Iowa Experimentation Station for his work in plant pathology and mycology.

In 1916, Carver published a research bulletin, “How to Grow the Peanut and 105 Ways of Preparing it For Human Consumption.” This bulletin includes several interesting ways to use peanuts like shampoo, mayonnaise, paints and coffee.

In 1896 George Washington Carver was offered the position of Director of the Agriculture Department at Tuskegee University in Alabama.

The George Washington Carver Museum in Tuskegee, Alabama, has a nutrition trail that features signs with nutritional facts and quotes from Carver.

George Washington Carver taught farmers and students how to use crop rotation to ensure soil did not lose its nutrients. His work helped farmers in the South to be more successful.

After Carver received his master’s degree Booker T. Washington offered him a job at Tuskegee University in Tuskegee, Alabama to serve as the Director of the Agriculture Department at Tuskegee Normal and Industrial School.

George discovered that boll weevils, an insect that was destroying cotton crops, did not like peanuts. He encouraged farmers to plant peanuts to make a good living.

George Washington Carver found hundreds of ways to use peanuts. Some of the peanut products he invented included clothing dyes, fuel for cars, plastic products, cooking oil, and peanut butter.

Before sustainability was a pop culture topic, Carver promoted responsible farming practices, like planting peanuts in rotation with cotton since peanuts add nutrients to the soil.

George Washington Carver found many hundreds of uses for sweet potatoes and soybeans.

In 1920, Carver spoke at the United Peanut Association of America's convention. He was such a success that the group decided to have him tell Congress about peanuts and the need for a tariff in January 1921.

President Theodore Roosevelt and the United States Congress consulted George Washington Carver on agricultural matters because he was known as an expert around the world.

Polio victims were often left with weakened muscles or paralyzed limbs. Carver felt that peanuts — or rather peanut oil — could help these people regain some lost function.

In the 1930s, Carver began to treat patients with peanut oil massages. He reported positive results, which in turn made more and more people want to undergo the treatment.

George Washington Carver became known as the ‘farmer's best friend' in the South.

Though Carver worked on many products, both peanut and non-peanut, he didn't see the need to keep detailed records.

Many of George's inventions were not patented by him because he believed his ideas should be free. Many of his products were patented by industrialists and they made fortunes from his inventions.

Carver was a friend, colleague or associate to a veritable "Who's Who" of the 20th century.

George Washington Carver was the first African-American to have a national park named for him; it is located in Missouri.

Between 1919 and 1926, Carver corresponded with John Harvey Kellogg (of cereal fame), as they shared an interest in food and health.

George's artwork was shown at the 1893 World's Fair.

Carver and automaker Henry Ford quickly struck up a friendship after meeting in 1937.

George Washington Carver published a report titled How to Grow the Peanut and 105 Ways of Preparing it for Human Consumption in 1916.

Carver would stop by Henry Ford's laboratory in Dearborn, Michigan, and Ford himself visited Tuskegee in Alabama.

In 1917, Carter revealed what motivated him: "Well, some day I will have to leave this world. And when that day comes, I want to feel that my life has been of some service to my fellow man." When he passed away in 1943, it would seem he had lived just such a life.

George Washington Carver died on January 5th, 1943 in Tuskegee, Alabama at the age of 79.