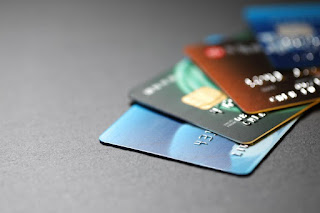 A credit card is a card and an attached account that allows its owner to make purchases of various goods and services with the promise of returning the money plus interest. It is essentially a line of credit that allows the card owner to purchase goods and services. when they don't have the money on hand. It could also be seen as a way to borrow money to pay it back over time. A credit card is different in that it requires the full amount that must be paid each month. Credit cards can be a good thing to have in financial emergencies, but many people use them to buy items they can't afford and go into debt from the abuse.

A credit card company set limits on how much you can charge on your card. This limit is based on your ability to handle debt.

There are so many credit cards in circulation that they could span a total of 86,981 miles if set side by side.

If you pay your bill in full during the grace period, you won’t have to pay a finance charge on purchases for that bill. A grace period is usually about 25 days.

If you don’t pay your bill by the due date (the date your grace period expires), you will be charged a late fee. These can be as high as $35!

The first retail store credit card was created in 1911 by Sears.

The Diners' Club Card was released in 1950 and could only be used in certain restaurants in New York.

You must notify your credit-card company as soon as you know your card has been stolen or used without your permission. If you do, you will be responsible for only the first $50 of unauthorized charges.

When credit cards were first released it was predicted that they would only be a fad.

Debit cards do not offer the same protection as credit cards.

It costs a credit card company roughly $80 to acquire a new customer through marketing and administrative fees.

Roughly 40% of people in the United States used credit cards to pay for their basic living costs in 2012. Some use it to pay for mortgages, utilities, groceries and even insurance.

In 2006, Mastercard, which had been organized as a bank cooperative, went public with an IPO price of $39.

Although states in the United States have usury laws that limit the amount of interest that can be charged on a credit card, they don't apply to national banks.

In 2012, a federal court approved a record settlement of $5.7 billion to a 2005 lawsuit against Mastercard and Visa filed by a number of retailers.

Credit card companies bypass usury laws by having their headquarters located in states with very easy usury laws such as Delaware, Virginia, and South Dakota.

The Visa card dates back to the mid-1970s, but its historical predecessor was the BankAmericard product from Bank of America.

If someone uses another person's credit card without permission the most the card owner can be held responsible for is $50.

In 1958, Bank of America worked to develop its universal credit card, distinguishing it from the merchant-specific store cards that dominated the industry landscape in the 1950s.

It is estimated that credit cards and debit cards account for 40% of all financial fraud.

The first BankAmericard actually came in the form of a paper card and came with a $300 credit limit.

Credit began when farmers had to get goods on account at the local merchants due to the seasonality of their business.

In 2013 the average household in the United States had an average of $15,191 in credit card debt.

Visa had 2.442 billion credit and debit cards, with the U.S. alone accounting for nearly 800 million of them.

American Express was originally a freight shipping competitor to the postal service. It was founded by Wells and Fargo.

VISA is considered to be the 2nd largest card payment organization in the world.

The first bank issued credit card in the U.S. was released in 1946 by John Briggs.

In Poland, VISA charges an unusually high swipe fee, anywhere from 1.5%-1.6% of the final price of any transactions.

Early credit cards were department store cards which meant that people could have multiple credit cards and large debts.

Besides the VISA name, its logo has also become one of the most recognizable brand names throughout history.

VISA was originally called BankAmericard, but was renamed in 1976 as VISA.

The VISA blue parts of the logo are supposed to signify the bright blue skies of California, while the gold parts represent the gold-colored hills of the state.

At one time credit card companies mailed cards to consumers without them having been requested. The U.S Congress started regulating the industry in the 1970s.

VISA has been a sponsor for the Olympics globally since 1986.

There are approximately 10,000 financial transactions completed with credit cards every second around the world.