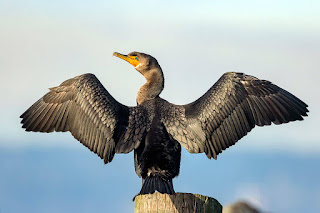 A cormorant is a species of aquatic bird, also known as shags, which include about 40 species of birds in the Phalacrocoracidae family. Cormorants are medium to large size birds weighing between 0.77 and 11.02 pounds and they have wing spans ranging from 18 to 39 inches. Most have dark colored feathers and a long, thin, hooked bill. Cormorants have webbed feet and dive from the surface of the water to catch their prey, which includes a diet of fish. Cormorants can dive as deep as 45 meters, and live along coastal regions, building their nests in trees, on cliffs, on the shore, or on islets. There is no distinction between a shag and cormorant, names that were given to two species discovered in Britain.

Some species of cormorants can attain speeds of up to 55 km per hour.

Cormorant species in the southern hemisphere have black and white feathers.

Cormorants become sexually mature at around 2 to 3 years of age.

The spotted shag of New Zealand is an exception as it has colorful feathers.

On average, 3 to 5 eggs are laid, but survivability is often low and not all will survive.

Many species of the cormorant or shag have colored skin on their face. The colors found on these species' faces can be red, yellow, orange, and even bright blue. The color becomes brighter when mating season approaches.

The chick is fed with regurgitated food that is pulled out of the adult’s throat.

Cormorants have four toes on their feet, which are webbed.

Cormorants live up to a maximum of about 25 years.

Cormorants are fish eaters. They prefer to dine on fish, but also on small eels, and water snakes when available.

Cormorant young and eggs are prey to larger predatory birds like eagles, gulls, and crows.

When done fishing, cormorants are known to hold their wings out on shore in the sun.

Cormorants have short wings for a flying bird due to their need to swim.

Cormorants have the highest flight cost of any flying bird.

Cormorant produce eggs once a year usually and they are usually a chalky blue color.

Young cormorants are fed via regurgitation.

The name “cormorant” is a contraction of the Latin words corvus and marinus which taken together mean “sea raven.”

Some cormorants use old blue heron nests to have their young.

All versions of the cormorant have glands that secretes an oil used for keeping the feathers waterproof.

Cormorants tend to build nests in colonies and the amount of bird poop they drop can sometimes be so much that trees below are killed or seriously damaged.

Mother and father cormorants take turns keeping the eggs warm. Once they are born both parents also regurgitate fish for the young to eat.

Cormorants are pellet-makers. They create pellets out of the bones and scales of the fish they eat and spit it out, much like some owls.

In Asia cormorants have been trained to fish for people, because they are so talented at catching them. Every time the cormorant catches seven fish they are given one to eat.

Once a cormorant has finished eating its meal it regurgitates the indigestible bones and parts.

They are expert swimmers and can dive up to 100 feet deep to catch fish.

Cormorants can be harmed by environmental pollution such as oil.

They can stay underwater for more than one minute!

Cormorants build nests on rocky crags to protect their babies. Sometimes they use old blue heron nests high in trees.