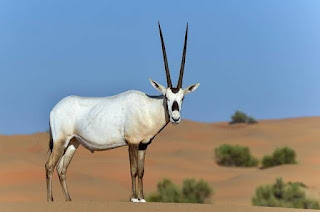 Oryx is a large antelope. It reaches 5 to 7 feet in length; 18 to 35 inches in height at the shoulder and weight between 220 to 450 pounds, depending on the species.

Originally, various oryx species were found in all of Africa's arid regions.

Oryx is easily recognized by horse-like neck with mane, white head covered with black triangular patches and long V-shaped horns that can be straight or swept back. Females have thinner horns than males. Horns are usually 2 to 3 feet long.

Well adapted to the conditions of their hot, arid habitats, oryx can live as long as 20 years.

Oryx is territorial animal which uses its horns to establish dominance in the herd. Dominant male uses its dung to mark the territory.

The social system of the oryx is unusual in that nonterritorial males live in mixed groups with females, or with females and their young.

Males that dominate are territorial to a degree, marking their areas with dung deposits.

Oryx is an herbivore which prefers eating grass and thorny shrubs. They eat during the morning and in the late afternoon, when the temperature is lower.

Groups are composed of 10 to 40 males and females of all ages and both sexes; herds of up to 200 are common in some East African habitats.

Oryx can survive long period without water (even couple of weeks). Also, certain plants, such as wild melon, underground roots and tuber, can provide enough moisture.

Oryx has unique mechanism which helps it survive in the arid and desert conditions where the temperatures are high most of the time. Unlike other mammals, oryx can rise its body temperature to prevent perspiration and loss of body-water during the day. It also uses specific network of capillaries in the nose to cool down the blood that is traveling to the brain. Cooling of the blood prevents over-heating of the brain.

Their diets consists mainly of coarse grasses and browse from thorny shrubs.

Oryx has excellent sense of smell. It can detect rainfall 50 miles away. Once the rainfall is detected, whole herd is on the move.

In desert areas oryx consume thick leaved plants, wild melons, as well as roots and tubers they dig out of the ground.

Just like other antelopes, oryx uses its speed to avoid predators. It can reach the speed of 37 miles per hour.

They may drink if water is available but can survive days or even weeks without it.

When faced with direct threats, animals in the herd stand sideways to appear larger. If that does not scare the predators - oryx will use its long horns for self-defense.

A female leaves the herd to give birth and hides the calf for 2 or 3 weeks, visiting a few times a day to nurse it.

Typical predators of the oryx are lions, wild dogs and hyenas.

Like other antelope species, oryx primarily depend on flight to escape from predators such as lions, wild dogs and hyenas.

Oryx mates throughout the whole year. As soon as pregnancy ends, female can mate again.

The oryx is a good example of an antelope that has successfully adapted to the harsh conditions of dispersed food, intense heat and little or no water.

Pregnancy lasts 8 and the half months. Calf can run as soon as it is born, but it stays hidden in the grass for the first couple of weeks of its life, until characteristic body coloration appears.

Young oryx feeds on milk between 6 and 9 months. Oryx reaches sexual maturity at the age of two years. At that time, young males usually leave their herd and join some other.

Herd composition in the wild constantly changes according to need.

Oryx lives 20 years both in the captivity and in the wild (if the environmental conditions are good).

Groups are composed of 10 to 40 males and females of all ages and both sexes; herds of up to 200 are common in some East African habitats.