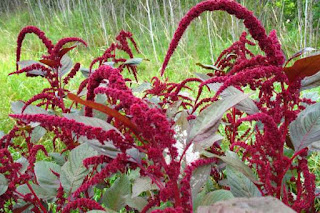 Amaranthus is a cosmopolitan genus of annual or short-lived perennial plants collectively known as amaranths. Some amaranth species are cultivated as leaf vegetables, pseudocereals, and ornamental plants. Most of the Amaranthus species are summer annual weeds and are commonly referred to as pigweeds.

Amaranth has erect, bushy stem that can reach few inches to 10 feet in height, depending on the species.

Amaranth is an annual, large and bushy plant usually about 90-130 cm high.

Amaranth produces broad leaves that can be light or dark green, reddish, covered with purple veins or variegated.

The plant yields flowers at summer or autumn (August and October) which is pink or white in color.

Amaranth blooms during the summer and autumn. It belongs to a group of self-pollinating plants.

The seeds are yellow, white, red, brown, pink, or black in a spherical or flattened lenticular shape.

Clusters of densely packed flowers of amaranth transform into large, heavy seed heads. Single plant can produce 60.000 seeds per year. Despite many morphological and nutritional similarities with other cereals, amaranth is not a true grain (that's why it is known as "pseudo-cereal").

The Amaranth plant prefers the warm climate and thrives in well-drained soils. As the plant is annual, it has got the lifespan of one year.

The younger greens and small varieties of Amaranth are consumed as salad and older greens are used as a substitute for spinach.

Name "amaranth" is derived from a Greek word "amarantos" which means "everlasting" or "one that does not wither". Name refers to the flower buds of amaranth that retain vivid coloration even after drying.

It could be added to soups or stews and also taken as a cereal for breakfast.

Amaranth has better nutritional value than wheat and rice and unlike them, it is also an excellent source of L-lysine, essential amino acid that facilitates absorption of calcium and synthesis of collagen, elastin, hormones and antibodies in the human body.

Popped Amaranth is added to bread, tofu or meat.

Amaranth can be ground in flour and used for the preparation of bread or as thickener for soups, sauces and stews. Seeds can be prepared and consumed like rice, as ingredient of granola bars or popped like popcorns.

Amaranth flour could be mixed with wheat flour to make bread or other foods.

Leaves of amaranth are also edible and very popular in Asia. They can be consumed stir-fried or as an ingredient of soups.

The seed of the Amaranth could be cooked or roasted like germ vegetables.

Popped seeds of amaranth mixed with honey or sugar (usually shaped like a skull) are traditionally consumed during Mexican "Day of the Dead" festival.

Amaranth is rich in antioxidants, , proteins, vitamins and minerals which make it the healthy food by preventing  the chronic diseases, enhancing immune system, stimulating repair and growth, lowering inflammation and blood pressure, lessening varicose veins, and promoting the strength of bones and others.

Seeds of amaranth are gluten-free and they can be safely consumed by people diagnosed with celiac disease.

It could be consumed either as a leaf vegetable, grain flour or a cereal grain.

The leaves of Amaranth possess various minerals such as calcium. Amaranth enhances the strength of bones and also prevents osteoporosis.

Amaranth completes its life cycle after one or few years, depending on the species.

Amaranth is high in fiber content which assists in the digestion and promotes the minerals uptake.