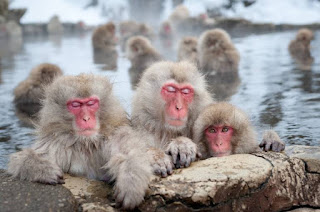 They live farther north than any other non-human primate. Like tanukis they are central characters in many folk tales and stories.

Snow monkeys vary in size depending on the region they inhabit: animals in the southern parts are smaller compared to the animals living in the colder, northern regions of Japan. On average, snow monkeys weigh between 25 and 40 pounds and reach 20 to 23 inches in length.

There are an estimated 150,000 snow monkey living in Japan, a tenfold increase from the World War II era.

Body of the snow monkey is covered with fur, whose color varies from brown to white.

They range from semi-tropical regions of islands south of Kyushu to the forests and mountains of northern Honshu.

Fur covers all parts of their body except faces and rear areas. Red color of the face is a positive sign that animal has reached adulthood.

Hokkaido is too cold for the snow monkeys.

Their ancestors are believed to have arrived from the Korean peninsula 500,000 to 300,000 years ago, long before the first humans arrived. They arrived mostly from the south and west and adapted to the climate and spread over time.

The Japanese macaques living in Shimokita Peninsula in Aomori Prefecture in far northern Honshu are the northernmost population of monkeys in the world.

Each troop has a male and female leader. Males establish their dominancy by proving their physical strength and ability to find food for all members of the group. Leader can hold his position for couple of decades. Females establish dominancy by inheriting the ruling position from their mothers or other relatives. This system is called matrilineality.

Their numbers have increased 10-fold in the last 40 years.

Snow monkeys are known as the one of the cleverest species of monkeys. They learn easily and share new skills and hunting (or eating) techniques with other members of the troop and with their offspring.

They are protected but widely regarded as pests. Monkeys that endure very cold weather are also found in the mountains of China.

It has been known that snow monkeys wash sweet potato in the water. Some troops use salty water for this purpose because they prefer salty taste of the food.

Humans have been fascinated with snow monkeys for some time. Representations of macaques have been found on prehistoric pottery. In folklore, such as the famous story about the monkey and the crab, monkeys are portrayed as clever thieves.

When snow monkey collect grains, they need to separate them from the dirt and sand. For this purpose, monkeys put the mixture of grains and dirt in the water and wait for sand and dirt to sink down, and the grains to appear on the surface of the water. As soon as grains appear, they can easily collect them and eat.

Macaques are a kind of monkey that spends most of its time on the ground and has little use of its tail. There are about 60 different species and subspecies and they range from the Atlantic to the Pacific in Eurasia.

Snow monkeys are playful creatures. They often made snowballs and roll them on the ground during the winter. Adult animals also participate in this type of game.

Macaques have a larger brain than other monkeys. This gives them the mental capacity to move their hands and fingers with almost human dexterity and provides them with sophistical hand to eye coordination.

Bonds between members are very tight. During the leisure time, snow monkeys groom each other to remove fleas and insects from the fur. Grooming nourishes the social bonds between animals.

Japanese macaque have pink faces and rumps, grey or burnt amber fur. They have strong teeth and short tails that are only about four inches long. They have a life-span of 30 to 40 years.

During the winter time, snow monkeys gather and hold each other tightly to prevent heat loss.

Adult males are 88 to 95 centimeters tall and weigh 10 to 14 kilograms. Females are 79 to 84 centimeters from head to foot long and weigh between 8 and 10 kilograms. Males have a different shaped face and bright red testicles. Adults males are as strong as a man.

Snow monkeys produce different types of sounds used for communication. Scientists noticed that type of sound depends on the location that monkeys inhabit, such as different dialects in human language.

Snow monkeys can survive in temperatures that drop to as low -14̊C in the winter. They are cloaked in thick, soft fur which consists of an outer layer of course hairs and shorter denser tufts underneath. This thick coat of hair allows them to live so far north.

Snow monkeys reach sexual maturity at the age of four years. Female's rear end turns red as a sign that she is ready for mating. She gives birth to a single baby after 170 to 180 days of pregnancy.
Snow monkeys can live up to 30 years in captivity.

Japanese macaques do not hibernate and normally survive the cold months by feeding on thin shoots and winter buds of deciduous trees. They also strip away the outer bark of trees and eat the inner bark.