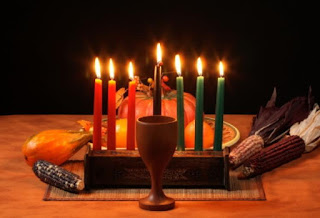 Kwanzaa's name is derived from the Swahili phrase 'Matunda ya Kwanzaa' which translates to 'first fruits of the harvest'.

Kwanzaa is represented by three colors - red, green, and black.

The first US postage stamp to commemorate Kwanzaa was issued in 1997. There have been 5 designs released since then, the most recent being in 2016.

The Kwanzaa color red symbolizes the bloodshed in the African people's struggle for freedom.

Kwanzaa is rooted in African culture, however, people from all racial and ethnic backgrounds are welcomed to join in the celebration.

Celebrities who have been known to celebrate Kwanzaa every year include Oprah, Maya Angelou, Chuck D, Angelina Jolie, and Synthia Saint James (who designed the first Kwanzaa postage stamp).

Seven candles are lit during Kwanzaa – the first one is black, the second is red and the third is green. The remaining four candles alternate between red and green. Red, green and black are the holiday’s symbolic colors.

Kwanzaa isn’t a religious holiday, but a cultural celebration of African heritage and togetherness.

Umoja is the principle of unity - in the family and in the community.

Traditional Kwanzaa gifts center on learning, so books about African heritage and culture are appropriate.

Kujichagulia is the principle of self-determination - responsibility in one's community as well as speaking for onself.

Ujima is the principle of responsibility and collective work - building and maintaining one's community.

Each night celebrants light a new candle on the kinara, a seven-branched candelabra.

Ujamaa is the principle of cooperative economics - building and maintaining businesses.

Many families spend the days before Kwanzaa decorating homes with crafts made by the young children in the community.

Nia is the principle of purpose - developing and building goals that will benefit the community's people.

Decorations usually involve the seven symbols made of different materials.

Kuumba is the principle of creativity - making a more beneficial and beautiful community for future generations.

Imani is the principle of faith - believing in the community's leaders, teachers, parents, and people.

Loot bags and prizes are also part of the celebration along with many traditional foods, costumes, and decorations.

Kwanzaa is seven days long and on each day a candle is lit and one of the seven principles are discussed.

Kwanzaa is now observed by more than 18 million people worldwide.

The candle holder of Kwanzaa is called a kinara. It has a black candle in the middle with three green candles on the left and three red candles on the right.

Despite coinciding with Christmas Day, Kwanzaa is not meant to replace the event.

Mazao is the symbol for vegetables, nuts, and fruits, to remind people of the harvest that fed and nourished Africa's people.

The Mkeka is a mat where the symbols of Kwanzaa are placed upon. It is often made of African cloth or straw.

The Vibunzi is an ear of corn, meant to represent fertility with one ear of corn placed on the Mkeka for every child in the family.

Mishumoa Saba is name for the seven candles of Kwanzaa representing the seven principles.

The Kinara is the candleholder that holds the seven candles of Kwanzaa, meant to symbolize corn branching off, similar to family branching off to form new family units.

The Kikombe Cha Umoja is a unity cup that people drink from to honor ancestors.

The Zawadi are the gifts that are given on January 1st - the last day of Kwanzaa. Gifts given on this day should encourage self-determination, growth, success, and achievement for the person receiving the gifts.