Facts About The Tuba 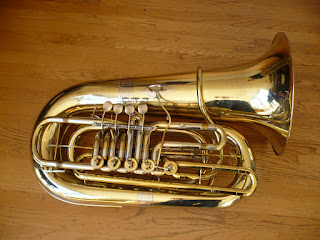 The tuba is the lowest-pitched musical instrument in the brass family. As with all brass instruments, the sound is produced by lip vibration, or a buzz, into a large mouthpiece. It first appeared in the mid-19th century, making it one of the newer instruments in the modern orchestra and concert band.

The Tuba was invented by Willhelm Friedrich Wieprecht and Johann Gottfried Moritz in September 12, 1835.

In Latin the word 'tuba' means horn or trumpet.

Tubas were introduced into the orchestra to replace the ophicleide, a keyed bugle of the Renaissance age.

A tuba's body consists of the mouthpiece, main tube, valve tube, valves, and the bell.

There was nothing wrong with the ophicleide that required its replacement in the orchestra. Instead, a successful marketing campaign representing the Tuba as a more up-to-date instrument forced its replacement.

The tuba's sound is deep and rich, and it is the lowest-pitched instrument on the brass family.

The tuba is capable of being more than the bass instrument that reinforces the bass string and woodwinds.

A tuba is used to produce the brass section of an orchestra's bass notes. They are usually found in jazz music and in brass bands as well.

Early tubas were altered to possess forward-facing bells in order to make recording the sounds of the instruments easier.

The tubist holds the instrument upright while playing, which is different than the way trombones or trumpets are held.

Tubas come in a variety of pitches ranging from the deep bass of the extremely rare subcontrabass tuba to the much higher pitched tenor tuba.

Tubas became a member of symphony orchestras in the mid-1800s.

Marching bands use a specially designed tuba for ease of carrying.

Some marching tubas are convertible, allowing the player to change the direction of the mouthpiece in order to perform with the tuba held in the lap.

Early jazz bands used tubas as a replacement for the stringed bass to avoid exposing the bass to weather extremes when playing outdoors.

The most common tuba keys are F, E flat, CC, or BB-flat. They may have between 3 and 6 valves.

A trumpet weighs about 1.3 kilograms, but a tuba weighs a whopping 13.6 kilograms!

In order to play the tuba properly a tubist requires a lot of breath.

According to the Guinness Book of World Records, the largest tuba ensemble had 502 tubists playing together at the same time.

Tubas can be found in a variety of music including tuba quartets, brass ensembles, jazz or pop groups, wind bands, brass bands, and orchestras.

In the 17th century, people played a long, curvy wood pipe with holes in it that looked like a snake. They called this instrument a serpent, which is considered a first version of today’s tubas.

The forward-facing design of the early tuba was created to make it easier to record, and they became known as recording tubas, while unaltered early tubas were known as concert tubas.

You don’t play a tuba by simply blowing into it. You need to make a buzzing sound with your lips.

The tuba is the biggest of all the brass musical instruments.

Jazz bands originally began using the tuba at outdoor concerts to replace the stringed bass, which was more easily damaged by bad weather.

The standard tuba has about 16 feet of tubes.

It takes a lot of breath to play the tuba. It is one of the loudest instruments in the orchestra but can also play very quietly.

The tuba usually plays the bass (lowest sounding) part even though it can play relatively high as well.

The tuba is used in all sorts of music and can be found in orchestras, wind bands, brass bands, jazz groups, pop groups, brass ensembles and even in tuba quartets (in groups of 4).