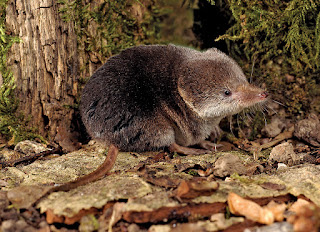 They have a higher metabolic rate than any other animal. The heart of the masked shrew, Sorex cinereus, beats 800 times a minute, considerably faster than that of the hummingbird.

Shrews must eat 80-90 % of their own body weight in food daily. Most will starve to death if deprived of food for half a day.

Shrew is covered with fur that can be brown or gray in color. Fur is, short, soft and thick.

They eat anything available, but prefer small animals; they are economically important as destroyers of insects and slugs that harm crops.

Shrew mainly eats insects, but it also consumes worms, fish, frogs, seed and nuts. It can also kill animals larger than its size, such as different kind of rodents. Shrews are beneficial for farmers because they eliminate insects, slugs and other pests from the crops.

Shrews are easily startled and will jump, faint, or drop dead at a sudden noise.

Shrew is known as nocturnal animal (active at night), but it is actually active both during the day and night.

The Etruscan Shrew (Suncus etruscus) which at about 3.5 cm and 2 g is the smallest living terrestrial mammal.

Shrew has the fastest metabolic rate of all known animals (even higher than hummingbird). Due to high energetic needs, shrew needs to eat almost during whole day and night. Short period of food deprivation (half a day) leads to death of the shrew.

Unlike most mammals, some species of shrew are venomous.

Shrew venom is not conducted into the wound by fangs, but by grooves in the teeth.

Shrew can be scared to death by a sudden noise, such as thunder.

The venom of the shrew contains various compounds and the contents of the venom glands of the American short-tailed shrew are sufficient to kill 200 mice by intravenous injection.

They do not hibernate, but can enter torpor. Shrews can lose between 30% and 50% of their body weight in winter, shrinking the size of bones, skull and internal organs.

Shrews are often killed by other animals, but they are rarely eaten afterwards, because they release smelly musk from the gland on the belly which is repulsive for most animals.

Shrew is one of the rare venomous mammals. Poisonous saliva is delivered to their enemies (or prey) by the grooves in their teeth. American short-tailed shrew contains enough venom to kill 200 mice.

In general, shrews live in and on the ground.

Shrews are solitary animals (live on their own) that can be seen together only during mating season. Shrew aggressively chases away other shrews from its territory during non-breeding season.

Shrews are distributed almost worldwide. Of the major tropical and temperate land masses, only New Guinea, Australia, and New Zealand do not have any native shrews.

Pregnancy lasts between 17 and 32 days. Female can have up to 10 litters per year.

Lifespan of shrews is very short, between 12 and 30 months.