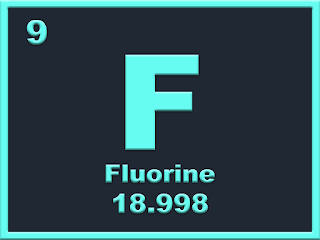 In 1906, Ferdinand Frederic Henri Moisson was awarded the Nobel Prize for Chemistry for his work isolating fluorine in 1886.
Fluorine is the most chemically reactive element. It reacts, often very vigorously, with all of the other elements except oxygen, helium, neon and krypton.
It is difficult to store fluorine as it is corrosive to most metals.
Fluorine is the most electronegative element. This means that in molecules fluorine attracts electrons more powerfully than any other element can.
Fluorine is the lightest of the halogens and has only one stable isotope, F-19.
Hydrofluoric acid, HF, dissolves glass. Its fluoride ions have a high affinity for calcium and can cause death by interfering with the body’s blood calcium metabolism when absorbed through the skin.
It is the most electronegative element on Earth.
Fluorine is a pale yellow, diatomic, highly corrosive, flammable gas, with a pungent odor.
Fluorine is the thirteenth most abundant element in the Earth's crust.
It reacts violently with water to produce oxygen and the extremely corrosive hydrofluoric acid.
The crust contains between 600 and 700 parts per million of fluorine.
Fluorochemicals, including many high-temperature plastics such as Teflon, are also made using fluorine.
It is usually only found in compounds due to its high level of reactivity.
Compounds of fluorine, including sodium fluoride, are used in toothpaste and in drinking water to prevent dental cavities.
Its most important mineral is fluorite, used as early as 1530 in smelting processes.
Hydrofluoric acid can dissolve glass and is used to etch the glass in light bulbs and in other products.
Its name comes from the source mineral, fluorite.
Chlorofluorocarbons (CFCs) were used in as refrigerants in air conditioning units and freezers but they have now been banned because they contribute to ozone depletion.
The dangerous nature of producing elemental fluorine keeps it in its more viable form, hydrofluoric acid, which is a $16 billion per year industry.
Fluorine has 11 isotopes whose half-lives are known, with mass numbers 15 to 25.
Fluorine is gaseous at room temperature, and its pale yellow color can only be viewed when looking down at it through a test tube; from the side, it is colorless.
Naturally occurring fluorine consists of its one stable isotope, 19F.
It condenses to a bright yellow liquid at -188 °C (-307 °F).
In 1809, French scientist Andre-Marie Ampere proposed that fluoric acid was a compound of hydrogen with a new element.
Reactions with elemental fluorine can be very explosive without warning.
Henri Moissan, who first isolated fluorine, also produced the world’s first artificial diamonds by applying huge pressures to charcoal.
Fluorine is rare in the universe, at only 400 parts per billion.
The element name fluorine ultimately came from the ‘fluor’ in fluorspar.
Any fluorine created in stars quickly breaks down through nuclear fusion with hydrogen to produce helium and oxygen or with helium to make neon and hydrogen.
The phenomenon of fluorescence was given its name because it was first observed in fluorite.
Fluorite mining produces approximately 4.5 million tons of the mineral per year which can be used for commercial fluorine purposes.
The chemical element fluorine is classed as a halogen and a nonmetal.
One form of fluorine used commercially is fluroide, which is applied as a treatment for dental health and added to water supplies in many places to increase tooth strength.
Fluorine was discovered in 1813 by Humphrey Davy.
Fluorocarbons are produced as industrial coolants and propellants.
In 1530, German mineralogist Georgius Agricola described the use of the mineral fluorspar in metal refining. Fluorspar (which we now know is mainly calcium fluoride) was very useful because it combined with the unwanted parts of metal ores, allowing the pure metal to flow and be collected.
Fluoropolymers, whose most widely known brand name is Teflon, are produced in nearly 180,000 metric tons annually.