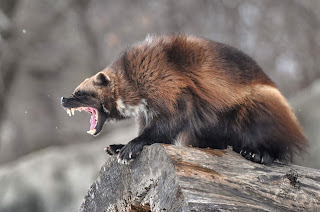 Many assume that the Wolverine is related to dogs or bears, but in fact it is the largest, and the most fearsome, member of the weasel family. They live in the arctic and subarctic areas of North America, Canada, North Europe, Russia and Siberia. Wolverines prefer cold and snowy boreal forests, taiga and tundra. They were hunted in the past because of their thick and water-resistant fur which was used as lining for parkas. Today, they are protected in several areas and their number in the wild is stable.

Its scientific name means “glutton” which is likely to be due to their rapacious appetite and single-mindedness.

Wolverines look like medium-sized dogs such as Beagle or Cocker Spaniel, but they are more muscular than dogs. They can reach 20 to 50 pounds of weight and length between 26 and 34 inches. Tail can be 7 to 10 inches long.

The Wolverine has a specially adapted thick, dense and oily fur coat which is highly hydrophobic (meaning that it resists water, like water off a duck’s back!), making it capable of resting in the barest of shelter in the harshest of conditions.

Wolverines have brownish to black fur with light stripes on its sides. Thick fur prevents animals from freezing.

Wolverines have powerful legs, large heads, round ears and short tail. Their feet have pads with sharp claws, which prevent slipping on the ice.

The female’s range, however, is considerably smaller at 50-350sq km.

Wolverines are typical terrestrial animals, but they can also climb trees and swim when needed.

They have several nest sites scattered throughout their territories.

Wolverines are nocturnal (active at night) animals, which travel 15 to 20 miles each day in the search for food. They can pass even more (between 37 to 50 miles) when the food sources are scarce. When they find themselves in the region with prolonged day light, they can switch to a daily hunt.

The wolverine will vigorously defend its large territory against other wolverines that dare to encroach on its space.

Wolverines have poor eyesight, but their senses of hearing and smell are excellent, which help them find the prey more easily.

Wolverines are omnivores (they eat both meat and vegetation). During the summer season, when different types of plants, berries and roots are available, wolverine expands its normal diet with plants. Even during summer time, wolverine cannot survive without meat. They eat rabbits, mice, porcupines, squirrels, but they also hunt injured deer and caribou.

As they are relatively slow, lumbering animals with short legs, wolverines do not chase or stalk prey. Instead, they usually lie hidden in the trees or behind rocks and then pounce on their prey.

Wolverines also eat leftovers of dead animals, killed by wolves and bears. Due to their excellent sense of smell, they can detect carrion hidden under the snow after the avalanche. Wolverines will also dig snow if they sense the smell of the hibernating mammal.

Wolverines are great climbers and they are often seen resting in the evergreen trees of their forest homes. They will use this advantage point to pounce on prey and can be seen falling from great heights.

Wolverines have special type of upper molar tooth, which is rotated for 90 degrees, allowing animal to tear apart the flesh of the prey quickly.

Wolverines often scavenge on the prey of other animals like the grizzly bear.

Wolverines are solitary animals, but they show friendly and playful behavior when they meet with other wolverines of the same family.

Wolverines will bravely approach a bear with its hackles raised and teeth bared, growling fiercely.

Wolverines are territorial animals who demand a lot of open space to roam. Male uses scent gland to mark the boundaries of his territory. Since they are polygamous (one male mates with more females), male usually share his territory with couple of females.

Female wolverines are known to have a delayed implantation which means the eggs float around the uterus for some time before attaching themselves.

They will only produce one litter every two to three years.

Female gives birth to two to three babies each year, usually in the late winter or early spring. Young wolverines (kits) are born in the underground den.

Young wolverines stay with their mother until they reach the age of two years. At that time wolverines become sexually mature.

Although not yet an endangered species, the wolverine’s numbers are declining, especially near human populations. They are shot by huntsmen for sport and fur.

Average lifespan of the wolverines in the wild is between 7 and 12 years.