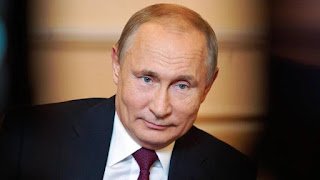 Vladimir Putin is a former intelligence officer and Russian politician who has essentially been the ruler in one form or another since 1999. Putin first served as acting prime minister in 1999 and then became acting president when the president at the time, Boris Yeltsin, resigned on December 31, 1999. Putin then won the presidential election in March 2000 and served as Russia's president for two terms, but was barred by the Russian Constitution from winning a third consecutive term. He then served as the prime minister until 2012, before easily winning the presidency again. Since the Russian Constitution was changed on December 31, 2008, Putin came up for reelection in 2018 and easily won once more. Putin was born Vladimir Vladimirovich Putin on October 7, 1952 to Vladimir and Marina Putin in Leningrad (now St. Petersburg), United Soviet Socialist Republics. Putin studied law and joined the KGB before marrying Lyudmila Shkrebneva in 1983 and having two daughters with her. The couple has since divorced. Putin is known to be a controversial yet popular figure. He has been accused of voter fraud and has been criticized for his treatment of gays, different non-Russian ethnic groups, and his use of force in Crimea, but he is still able to draw large crowds of followers.

On Aug. 18, 2015, Putin took a ride in a mini-sub to explore the ruins of a 10th-century Byzantine trading ship (pictured). Putin was visiting Crimea, which was annexed by Russia in 2014. He's also done this in 2013 when he dove in a submersible in the Gulf of Finland to explore the remains of a naval frigate.

Perhaps influenced by his Soviet background, Putin has portrayed himself as a fit, virile man over the years, releasing video of him riding horses and working out. With that said, he is a black belt in judo and has trained in sambo.

He married Lyudmila Putina in 1983, and the couple had two daughters: Maria and Katerina Putina. The children went to school under assumed names for security reasons. In April 2014, Putin and his wife separated after 31 years of marriage.

Putin was once popular in the West with liberal politicians, but he has lately been a bit of a boogey man, accused of influencing elections and behind pretty much anything negative in many countries.

His mother didn't approve of his decision to start learning judo when he was 11. An avid martial artist, Putin earned the fifth dan black belt in judo in 2001, the highest ranked ninth dan in taekwondo in 2013 and the eighth dan black belt in karate in 2014.

Putin helped land the 2014 Winter Olympics and the 2018 World Cup in Russia.

The Russian President is a dog lover. He named his Bulgarian shepherd dog, Buffy, after holding a nationwide naming contest. His other dog is an Akita Inu named Yume. Most of his pets were gifted to him, including a goat Skazka, a dwarf horse named Vadik and even a Siberian tiger cub.

As Putin has been accused by many Americans in the mainstream media, some of the intelligence agencies, and members of both the Democratic and Republican parties of attempting, or trying to influence American elections, he has shot back that Hillary Clinton and many of those same institutions have tried influencing Russian elections.

Putin is the head of the All-Russia People's Front, which isn't so much a political party as it is a coalition of parties and individuals who share similar, nationalist ideas.

After a stint at law school, Putin joined the KGB (main security agency for the Soviet Union until its collapse in 1991), rising to the rank of Lieutenant Colonel. During that period, he was posted to East Germany and monitored foreigners and consular officials in the main intelligence office there.

Since the KGB was an intelligence organization, the extent and details of what Putin did with that group is unknown. What is known, though, is that he served in East Germany during the Cold War.

Putin's paternal grandfather, Spiridon Ivanovich Putin, worked as a chef at Lenin’s country house and later as Stalin's chef. Trained by the NKVD, a predecessor to the KGB, Spiridon passed on how to balance political instincts with survival to his grandson.

After the collapse of the communist system, Putin used his influence and connections to quickly move up in the new Russian government. He befriended President Boris Yeltsin, which proved to be the biggest boon for his career.

Apart from Russian, Putin learned German in high school and speaks it fluently. He acted as an interpreter for German Chancellor Angela Merkel during her 2013 trip to Russia. He rarely uses English but picked up the language during his KGB stints in Europe.

Putin has been given credit for stabilizing Russia's declining birthrate and helping stabilize the country's economy. One of the ways he did that was by forming new economic partnerships with large, yet developing nations. The BRICS - Brazil, Russia, India, China, and South Africa - is an economic partnership and summit that he has supported since 2009.

Putin has won overall approval of Russian citizens. In elections, he won 53 percent of the vote in 2000 and 73 percent in 2004, while his ally Dmitry Medvedev won 70 percent votes in 2008. According to public opinion surveys, Putin's domestic approval rating was 89 percent in June 2015, an all-time high.