Facts About The London Eye 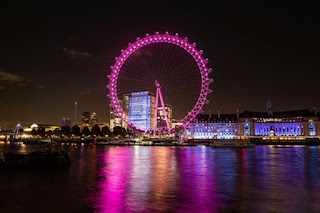 The London Eye is currently the fourth-largest Ferris wheel in the world.

A ride on the London Eye takes 30 minutes, and it travels at a speed of about 0.6 miles per hour.

With more than 3.5 million people checking out the Eye every year, it's now the most popular paid tourist attraction in the U.K.

The American celebrity who holds the record for most ride is Jessica Alba, who's gone on the Eye a whopping 31 times.

The London Eye resembles the wheel of a bicycle with tensioned steel cables supporting the wheel's rim similar to spokes.

The entire wheel weighs more than 1,000 tons, or well over 1 million pounds.

The London Eye has 32 air-conditioned and sealed passenger capsules that can hold as many as 25 people. Inside the capsule passengers can move around or sit in the chairs provided.

One thing that differentiates the Eye from other Ferris wheels around the world is the fact that it's cantilevered, or supported on only one side.

Each capsule of the London Eye weighs 10 tonnes.

More than 5,000 people have gotten engaged on the Eye since it opened.

It takes 30 minutes to ride the London Eye, and does not stop to allow passengers on and off.

At one point during the London Restaurant Festival, the Eye turned into a pop-up dining spot: Celebrity chefs like Gordon Ramsay and Daniel Boulud served meals in one of the capsules for ten patrons.

The 32 capsules of the London Eye are symbolic with one for each of London's boroughs. There is no number 13 due to superstitious beliefs so there is a number 33 capsule.

Magician David Blaine took a full rotation standing atop one of the wheel's pods in 2003.

The London Eye in London is symbolic to its people in the same way that the Eiffel Tower is to the people of Paris.

In 2004, a man dressed as Spider-Man climbed the attraction and spent 18 hours on top of a pod.

The London Eye is the fourth tallest Ferris wheel in the world today, but it does not even rank in the top 20 tallest structures in London.

In 2013, the Red Bull Academy turned the Eye into a rotating nightclub.

Approximately 3.5 million people visit the London Eye each year and it is the U.K.s most popular (paid) tourist attraction.
The London Eye is a popular place for proposals. More than 5000 engagements have begun while riding the London Eye.

Selfie sticks are still allowed at the London Eye.

From the top of the London Eye on a clear day it is possible to see Windsor Castle 25 miles away.

Legoland Windsor has a scale model of the Eye as part of its Miniland exhibit.

The London Eye was not the first giant Ferris wheel constructed in London. In 1895 the Empire of India Exhibition took place in London, for which the Great Wheel was built. It existed until 1907 when it was torn down. More than 2 million people rode the Great Wheel.

More than 500 weddings have also happened there, with the first one taking place in 2001.