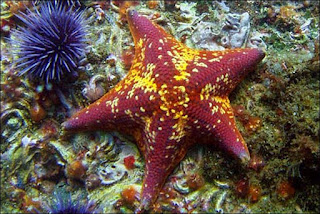 Starfish or sea stars are star-shaped echinoderms belonging to the class Asteroidea. Common usage frequently finds these names being also applied to ophiuroids, which are correctly referred to as brittle stars or basket stars. Starfish are also known as Asteroids due to being in the class Asteroidea.

They have no brain and no blood.

Although they are named "starfish", they are not related to fish at all. Starfish belong to the group of marine invertebrates which also include sea cucumber, sea urchin and sand dollar.

Starfish use filtered sea water to pump nutrients through their nervous system.

Their star-like shape is the reason why they are named starfish or sea stars. Most species have five arms, but there are sea stars with ten, twenty or even forty arms. Sea star with forty arms is called "sun star".

Sea stars can weigh up to 11 pounds.

Starfish vary in size. They usually have five to ten inches in length and weigh up to 11 pounds.

The average lifespan of a sea star is 35 years.

A Starfish in not a fish.

Another impressive characteristic of the starfish is their ability to regenerate different (missing) parts of their body.

If predator eats part of the starfish, remaining part (one arm for example) will develop missing arms and bring back previous look after some time. This process is not always fast and it may last up to one year.

Starfish is a carnivore who likes to eat clams, shells and mussels. It has two stomachs, one of which can be pushed outside the body during eating. This tactic allows them to eat large prey (that cannot be swallowed with their small mouth).

They live in cold and warm climates all over the world.

They usually have five arms.

Starfish move using tube feet, which consists of hundreds projections on the underside of their bodies. They are used for walking and catching of the prey.

There is a group of less common species that have more than five!

Starfish do not have a brain. They also do not have blood like other animals. Instead of blood, sea water circulates through their body with the help of sieve plate.

They cannot survive in fresh water.

Surface of the starfish body is covered with bony skeleton which often contains different kind of spikes and thorns. They serve as excellent protection against predators.

It can take up to a year for a lost limb to grow back.

Typical predators of the starfish are sea otters, rays, sharks, seagulls and different types of fish.

When they capture prey, they have tiny suction cups to grab ahold of their food. Then their stomach exits their mouth to digest the food, and reenters the body when they’re done eating.

Starfish can reproduce sexually (by combining reproductive cells of males and females) or asexually (by dividing its body at the center and by regenerating the missing part).

Depending on the species, a sea star's skin may feel leathery or slightly prickly. Sea stars have a tough covering on their upper side, which is made up of plates of calcium carbonate with tiny spines on their surface.

During sexual reproduction, males and females release millions of sperm and eggs in the water, where they mix together to form a fertilized egg that develops into new starfish. Female is capable of producing millions of eggs at once. This is important because small portion of the eggs survive to become adult starfish.

A sea star's spines are used for protection from predators, which include birds, fish, and sea otters. One very spiny sea star is the aptly named crown-of-thorns starfish.

Starfish are not hermaphrodites (animals which have characteristics of both genders) but they are capable of changing the gender whenever they like during their lifetime.

Instead of blood, sea stars have a circulatory system made up primarily of seawater.

Starfish can survive up to 35 years in the wild.

Sea stars move using hundreds of tube feet located on their underside. The tube feet are filled with seawater, which the sea star brings in through the madreporite on its top side.