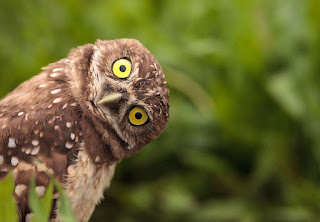 Owl is the bird of prey that can be found on every continent except Antarctica. There are more than 200 species of owls that live in different kind of terrestrial habitats: deserts, mountain areas, open grasslands and forests. Owls can be also seen near farms and villages. Some species of owls are endangered due to habitat loss, diseases and killing.

There are around 200 different owl species.

Size of the owl depends on the species. Smallest owl (Elf Owl) reaches weight of only one ounce and length of 5 inches.

Owls are active at night (nocturnal).

Largest owls (Eurasian Eagle-Owl and Blakiston's Fish Owl) can reach weight of around 10 pounds and a wingspan of 6.6 feet.

A group of owls is called a parliament.

All owls can be divided in two large groups: barn and true owls. Barn owls are medium-sized birds with heart-shaped face, long legs and strong talons. Of all known owls, only 19 species belong to this group. True owls are more diverse group of owls with around 190 species that vary in size, color and appearance.

Owls can turn their heads as much as 270 degrees.

Owls do not chew their food because, just like all other birds - they do not have teeth. If the prey is too large, owl uses its sharp beak to tear the prey apart.

Owls are farsighted, meaning they can’t see things close to their eyes clearly.

Since owl eats the whole prey, it regurgitates (vomits) undigested material composed of bones, feathers, fur and teeth, in the form of hard pellets. Ornithologists (scientists which study birds) collect and examine these pellets when they want to investigate the type of diet characteristic for the owls that are living in certain area.

Owls are very quiet in flight compared to other birds of prey.

Barn owl is very beneficial for the farmers because it eliminates rodents in the barns and fields. It can eat up to 1000 mice each year.

The color of owl’s feathers helps them blend into their environment (camouflage).

Owl is very successful hunter because it can fly silently. Special kind of soft feathers muffle the sound of the moving wings, allowing the bird to approach the prey unnoticed.

Barn owls can be recognized by their heart shaped face.

Feather coloration is species specific. It can be brown, rust, gray, white and black. Mix of the colors provides nice camouflage for both predators and prey.

Many owl species have asymmetrical ears. When located at different heights on the owl’s head, their ears are able to pinpoint the location of sounds in multiple dimensions. Ready, aim, strike.

Some species of owls have ear-like structures on their head. They cannot detect sound, but serve as structures which provide camouflage. They can be also used to show aggression.

The eyes of an owl are not true “eyeballs.” Their tube-shaped eyes are completely immobile, providing binocular vision which fully focuses on their prey and boosts depth perception.

Owls have excellent sense of hearing. Ears are located on the both sides of the head, behind the eyes. They are often located on different heights, providing better reception of the sound, which is important for detection of the prey.

Although it looks like the owl can turn its head completely (360 degrees), it can move it only to a certain extent (just 270 degrees). Owl can look across its shoulder, but it cannot rotate the head a full circle.

The tiniest owl in the world is the Elf Owl, which is 5 - 6 inches tall and weighs about 1 ½ ounces. The largest North American owl, in appearance, is the Great Gray Owl, which is up to 32 inches tall.

Owls are farsighted, which means that they cannot clearly see the objects which are in front of their eyes.

The Northern Hawk Owl can detect—primarily by sight—a vole to eat up to a half a mile away.

Owls are solitary creatures. Although they do not live in groups, name for the group of owls is parliament. They are territorial animals which hoot to announce their territory. Not all owl species are capable for hooting. Other than hoot, owls produce variety of other sounds used for communication, such as screeches, hisses, and screams.

Northern Saw-whet Owls can travel long distances over large bodies of water. One showed up 70 miles from shore near Montauk, New York.

Owls lay between few and dozen eggs (most commonly between 3 and 4 eggs). They are white and round. Eggs do not hatch at the same time.

Owls are zygodactyl, which means their feet have two forward-facing toes and two backward-facing toes. Unlike most other zygodactyl birds, however, owls can pivot one of their back toes forward to help them grip and walk.

Lifespan of owls in captivity is 20 years.