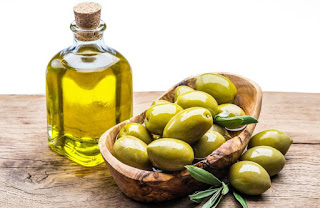 Olive tree is a type of small tree that belongs to the Oleaceae family. There are 6 subspecies of olive trees and hundreds of cultivars, produced via selective breeding. Olive tree originates from the coast of Mediterranean sea and western Asia. Due to popularity of the fruit, olives can be found in the temperate and warm areas throughout the world. Olives prefer hot weather and long periods of sun during the day. Even though they can survive on different soils, limestone offers the best conditions for fruit production. Olives are prone to fungal diseases and they are often targeted by various insects which lay eggs and destroy plant's tissue. Luckily, olives are still numerous both in the wild and in the culture. They are not on the list of endangered plants.

There are olive trees That are more than 1,000 years old.

Olive tree is evergreen plant. It can reach 26 to 49 inches in height. Crown is well branched and rounded in shape. Largest type of olive tree is called "donkey olive", and the smallest type "bullet".

Olive tree has oval-shaped, elongated leaves. They are leathery, grayish green on the upper side and whitish on the lower side.

Approximately 73% of the fatty acid in olive oil is a simple unsaturated fat called oleic acid.

Olive tree starts to bloom after 4 years. First harvest can be expected after 15 years.

The first eyeshadow was created by mixing olive oil and ground charcoal.

Olives cannot be consumed directly from the tree. Harvested olives need to be processed with brine before they become tasteful.

Olives are rich source of oils, minerals and vitamins A, E, K and B.

In France, parts of Italy and parts of Spain Is it illegal to sell old olive trees.

Olive can be used in the form of oil or as table olives.

Olive trees are hardy and can live in other climates than the Mediterranean climate.

Out of all harvested olives, 90% will be turned into oil, and only 10% will be used as table olives.

It takes about fifteen years before an olive tree is mature and you can start harvesting fruit.

People around the world consume 2.25 million liters of olive oil each year. This oil is much healthier and has more delicate flavor compared to the regular vegetable oils.

It takes 7 liters of olives for the production of one liter of oil.

The flowers are very delicate, with three to four white petals surrounding a light-yellow centre.

The first flower of the tree will come when it is around four years old.

United Nations and four states in the United States have olive branch on their flags.

Unripe fruit is usually green whereas ripe fruit can be a variety of purples or black.

Olive trees can live from 300 to 600 years. Several trees managed to survive couple of thousand years. Some of them still produce fruit.