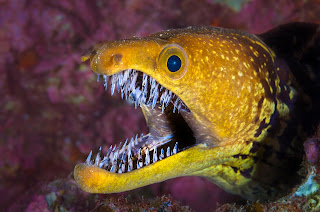 Moray eel is the largest type of eel. There are 200 different species of moray eel found in fresh, marine and brackish waters. Moray eels prefer warmer water and they can be often found in the shallow water and near the coral reefs. Although moray eels are commercially fished, they are not endangered.

The moray eel has two sets of jaws.

Size of the Moray eel depends on the species. It ranges in length from 6 inches to 15 feet. Average weight of the moray eels is 30 pounds.

Larger moray eels can weigh up to 30kg.

Moray eel has a long and slender body which resembles to snake, but they do not belong to the group of reptiles - they are true fish.

Most moray eels are nocturnal.

Color of the moray eel varies from black to yellowish brown. Underside of their body is pale.

Moray eel has a long dorsal fin which runs from the head to the tail. Most moray eels lack pectoral and pelvic fins.

There are more than 200 known species of moray eels.

Moray eel spends most of its time hidden in the caves and rock crevices on the bottom of the sea. It attacks like an ambush predator that is waiting for the perfect prey to appear.

The moray eel sometimes hunts in a group.

Contrary to what is said about its aggressive nature. Admittedly, its bites can physically hurt the divers but the moray eel is very territorial, and it attacks only when it feels threatened. It may be more aggressive when it is in its breeding season.

Moray eel uses specific technique while hunting other animals. They grab a prey using the element of surprise and wrap its body around it until it becomes flattened enough to be swallowed. Other option is to tear apart the victim and eat it one bite after another.

The average moray comes with curved teeth that are ideal for snagging fish.

Teeth are pointed backwards, preventing the slippery prey to escape.

Although moray eel is one of the top predators in the water, it is often hunted by other large sea creatures such as sharks and barracudas.

Laced moray eels (Gymnothorax favagineus) are also known as leopard morays or honeycomb morays because of the black spots on their white and tan bodies.

Moray eel has large eyes, but does not see well. It has a good sense of smell, which helps it locate the prey.

Like all other fish, moray eel breathe using the gills. They are located behind the head, in the form of the two circular openings. Moray eel keeps its mouth open (not because they are ready to bite any second, but) because it needs to provide constant circulation of the water toward the gills.

Unicorn moray eels (Echidna unicolor) have ghostly white or tan bodies with dark rings at the tops of their heads.

Mating season happens every time water temperature and food sources reach the optimal level. Male and female wrap their bodies together for couple of hours. During this time, female can release up to 10 000 of eggs that will be fertilized by the male's sperm. Fertilized eggs will develop into larva which swims as a part of the plankton (up to year) until it becomes large enough to come back to the bottom of the sea, where it will start its life as a fully formed moray eel.
Great percent of moray eel in the larval phase ends up in the stomach of the large predators. Those that survive can live between 10 and 30 years.

Zebra moray eels (Gymnomuraena zebra) have black and white stripes much like a zebra.