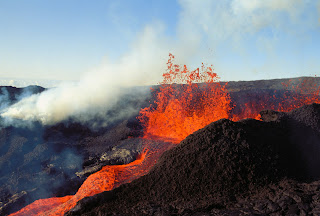 Mauna Loa is one of five volcanoes that form the Island of Hawaii in the U.S. state of Hawaiʻi in the Pacific Ocean. The largest subaerial volcano in both mass and volume, Mauna Loa has historically been considered the largest volcano on Earth, dwarfed only by Tamu Massif. It is an active shield volcano with relatively gentle slopes, with a volume estimated at approximately 18,000 cubic miles (75,000 km3), although its peak is about 125 feet (38 m) lower than that of its neighbor, Mauna Kea. Lava eruptions from Mauna Loa are silica-poor and very fluid, and they tend to be non-explosive.

Mauna Loa covers more than 50 percent of Hawaii Island, extending into Hilo, most of the southern portion of the island and toward Kiholo Bay in North Kona.

The Pacific plate underneath Mauna Loa sags because of its enormous weight.

Mauna Loa is so big that it covers more than 50% of Hawaii's big island.

Mauna Loa is so huge that it actually causes the Pacific plate it is residing on to sag under the weight of the volcano.

Mauna Loa is one of five volcanoes that make up Hawaii. The others include Mauna Kea, Kilauea, Hualalai, and Kohala.

Mauna Loa is considered to be in the shield stage. The caldera Mokuaweoweo at Mauna Loa's summit measures approximately 3.7 x 1.9 miles in size.

It is believed that Mauna Loa has erupted at least once every six years for the past 3000 years, but since records have been kept it has erupted every five years. Records were not kept prior to the late 1700s, but even those were not well documented.

About 98 percent of the volcano’s surface is covered with lava flows less than 10,000 years old.

Because Mauna Loa is located in an area that is populated, the U.S. Geological Survey maintains a mapping system to identify hazard zones.

Over the past 3,000 years, Mauna Loa has erupted once every six years and evidence of four explosive events have been found. Since written records began, the volcano has erupted about once every five years, he said.

Since the documentation of eruptions of Mauna Loa has been kept, there have not been many fatalities. It is usually the lava flow that causes the most damage.

Mauna Loa has erupted 33 times since 1843, which is when written records of volcanic eruptions began post European contact.

Mauna Loa has been monitored since 1912 when the Hawaiian Volcano Observatory was established by its founder Thomas A. Jaggar.

In 1950, lava erupted from a fissure on Mauna Loa’s southwest rift zone, at an elevation of almost 10,000 feet, crossing Highway 11 in three places and destroying about two dozen structures before reaching the South Kona shoreline about three hours later.

Thomas A. Jaggar tried to reach the summit of Mauna Loa in 1914 to watch the eruption. It wasn't until 1915 that he succeeded in having a route to the summit built by the US Army.

In 1984, Mauna Loa last erupted, sending lava within 4.5 miles of Hilo during an eruption between March 25 and April 15.

Scientists monitor the seismic activity to help determine when another eruption at Mauna Loa will occur.

The ancient Hawaiians lived on Hawaii as far back as 1500 years ago. They believed the volcano peaks were sacred, with Mauna Loa being the most sacred of them all because of its massive size.

Mauna Loa is so large that it impacts the climate of Hawaii. Hilo, on Mauna Loa's eastern side, is the wettest U.S. city, but there are lots of forested areas because of it.

Mauna Loa's summit is characterized by cold temperatures, with most precipitation being snow.

The last eruption of Mauna Loa in 1984 resulted in lava flow that stretched as far 4.5 miles of Hilo. This eruption lasted from March 25th to April 15th.
Share This