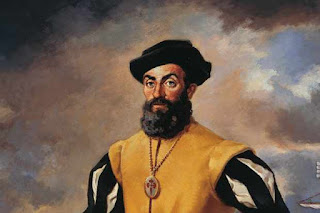 Ferdinand Magellan was born in 1480, although it is not certain whether he was born in Porta or Sabrosa, Portugal. He was born to parents of nobility, who died when Ferdinand Magellan was only 10 years old. He then became a page for the Queen and studied cartography, astrology and celestial navigation at Queen Leonora's School of Pages in Lisbon, Portugal. While in his mid-20s he sailed to East Africa with a fleet from Portugal. He was wounded in Morocco and as a result spent the rest of his life limping. He moved to Seville, Spain in 1517 after being denied further work from the Portuguese king due to a false accusation. In 1519 he set out on a voyage to prove the world was round. He died in 1521 but some of his crew returned to Spain in 1522, proving the world was round.

Magellan got his first taste of sea life when he joined a Portuguese military fleet headed for India at the age of 25.

After his trip to East Africa the king of Portugal denied Ferdinand Magellan any further work because he had been accused of illegal trading. This was his reason for moving to Seville, Spain in 1517.

Magellan’s military stint in Morocco was unsuccessful: Not only was he wounded, he was later accused of illegally trading with the Moors, a charge that tarnished his reputation in his home country of Portugal.

Ferdinand Magellan married Beatriz Barbosa and had a son with her.

In 1511, Magellan helped invade the port city of Malacca and came home with a Malay-speaking man known now as Enrique de Malacca. Enrique would become Magellan’s most vital resource.

Beatriz's father Diogo introduced Ferdinand Magellan to the Spanish court so he could tell them about his idea to set sail to prove the world was round.

Magellan traveled with large amounts of sherry on board—more than 253 butts and 417 wineskins—and reportedly spent more money supplying his ship with booze than he did on weapons.

Ferdinand Magellan's voyage was approved and financed by young King Charles I and on August 10th, 1519 he set sail with five ships of 270 men aboard.

In March 1520, Magellan’s ships reached what is now Port San Julián in southern Argentina. Here, three of his captains—all Spaniards who were reportedly jealous that the position of commander had been bestowed to a Portuguese man—vowed to kill Magellan. Long story short, Magellan killed them instead.

Magellan’s expedition had a multinational crew. Spaniards and Portuguese made up the vast majority of the sailors, but the voyage also included mariners from Greece, Sicily, England, France, Germany and even North Africa.

There was a fabled passage said to cross South America without having to travel around Cape Horn. This was the route that Ferdinand Magellan wanted to find.

Magellan’s voyage was sparked by a treaty between Spain and Portugal.

When the fleet reached San Julian off Patagonia's coast, Magellan's crew mutinied. Magellan regained control of his fleet and the voyage continued.

Magellan was considered a traitor to his home country of Portugal.

On October 21st, 1520 Magellan found the passage he had been searching for. It separates Tierra del Fuego from the southern tip of South America. It is a curvy narrow channel that was named after the explorer. It is called the Strait of Magellan.
It took a month to travel the 350 mile strait. The captain of the San Antonio did not complete the voyage. He turned around and went back to Spain.

Many of Magellan’s crew mutinied or deserted the expedition.

In November of 1520 the fleet reached the Pacific Ocean, making them the first Europeans to ever see it. Magellan called it the Mar Pacifico.

Magellan’s expedition claimed to have encountered giants in South America.

Ferdinand Magellan and his crew did not have enough supplies for the voyage and they had to eat rats and sawdust on the trip in order to survive. Magellan had underestimated the size of the Pacific Ocean.

Magellan converted many of the natives at Cebu, in the Philippines to Christianity. Not all the natives converted and the Cebuans requested Magellan's help in battle against the Mactan people who refused to convert.

Magellan was a staunch Christian evangelist.

During the battle, Magellan was struck with a poison arrow. He had assumed that the European's weapons would ensure a victory.

Magellan’s slave, Enrique, may have been the first person to truly circumnavigate the globe.

On April 27th, 1521, Ferdinand Magellan died in Cebu in the Philippines as a result of the poison arrow.

The next circumnavigation of the globe took place nearly 60 years after the return of Magellan’s expedition.