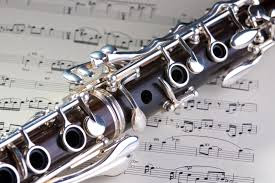 It is generally believed to have been invented by the Nuremberg instrument maker Johann Christoph Denner at the start of the eighteenth century.

The clarinet's earlier single-reed instrument relatives include the alboka, the albogue, the double clarinet, and the chalumeau.

The clarinet produces sound by means of a single reed attached to the mouthpiece.

The chalumeau was converted to a clarinet by changing a key into a register key. The chalumeau was a single-reed instrument made with 8 finger holes. It was first made in France but later it was also made in Germany.

A number of physical finger keys are attached to the cylindrical section (known as the body) and are used to vary the pitch.

As the clarinet was further developed the pads were added to cover the tone holes.

Up until the first half of the eighteenth century, the clarinet had only two finger keys.

The clarinet body is made up of the mouthpiece, barrel, upper joint, pads, keys, ring key, rod, lower joint, and bell.

The configuration that is now standard was perfected by Klosé in the mid-nineteenth century, based on the ideas of Theobald Boehm. Since the instrument is based on Boehm’s system, it is called the Boehm clarinet.

Most believe that it was Johann Denner, not his son Jacob that invented the clarinet in the late 1600s.

There are also clarinets of similar size in different key pitches, which have tubes of varying length.

Johann Denner was an instrument maker in Germany, who opened his shop in 1678. Soon after he developed the clarinet.

The last instrument to be included in the symphony orchestra was the clarinet.

The first evidence of the existence of a bass clarinet comes from France toward the end of the eighteenth century, when a man named Gilles Lot created an instrument called the Basse-Tube.

George Gershwin composed on the most popular clarinet solos ever created. It is called 'Rhapsody in Blue'.

The bass clarinet as we know it today, with its large keys and straight tubular body, was first made by Adolph Sax (inventor of the saxophone) in 1838.

The first piece of music to feature the bass clarinet was Meyerbeer’s Les Huguenots, which contains a long solo for the instrument in the fifth act.

Most early clarinets were made of boxwood or ebony — the same materials that were also used to make recorders.

Today, grenadilla is now the most commonly used material for clarinet making.

Clarinets were popular in jazz music beginning in the early 1900s, continuing to be popular until the 1940s.

Mozart wrote a magnificent work for clarinet, the Clarinet Concerto in A major, Köchel 622.

The clarinet has also been used in rock music and other popular music genres. Musicians and groups such as Aerosmith, Pink Floyd, The Beatles, Billy Joel, and Jerry Martini have included the clarinet in their music.

In modern times, the most common clarinet is the B♭ clarinet.

The clarinet has proved to be an exceptionally flexible instrument, used in the classical repertoire as in concert bands, military bands, marching bands, klezmer, jazz, and other styles.