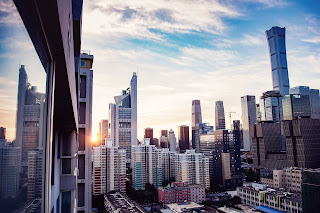 Beijing, China’s sprawling capital, has history stretching back 3 millennia. Yet it’s known as much for modern architecture as its ancient sites such as the grand Forbidden City complex, the imperial palace during the Ming and Qing dynasties. Nearby, the massive Tiananmen Square pedestrian plaza is the site of Mao Zedong’s mausoleum and the National Museum of China, displaying a vast collection of cultural relics.

Beijing is one of the oldest cities in the world.

Beijing has been the capital to six notable Chinese governments. China has been ruled from Beijing for over 700 years, which is why there are so many historical sites to explore.

Peking Man (early human inhabitants of the Beijing Municipality) was discovered when fossils were found in the early 1900s, in caves at Dragon Bone Hill. They have been dated to as many as 750,000 years ago. These fossils were Homo erectus.

Before settling in on the name “Beijing” in 1403, the city had a series of names: Jicheng (‘City of Ji’), Yanjing (Capital of Yan’), Nanjing (‘Southern Capital’), Zhongdu (‘Central Capital’), Dadu (‘Great Capital’), Beiping (‘Central Peace’), etc. Beijing (‘Northern Capital’) was the 16th name given to the city.

Homo sapien fossils were found in the Beijing Municipality dating back 27,000 years.

Beijing’s long and rich history has left behind an abundant historic and cultural heritage, including seven UNESCO World Heritage Sites: the Great Wall, the Forbidden City, the Summer Palace, the Temple of Heaven, the Ming Tombs, Peking Man Site at Zhoukoudian, and the Grand Canal.

Beijing's first walled city existed from the 11th century BC to the 7th century BC. It was a city-state called Ji.
Later Ji was conquered by Yan and renamed Yanjing.

Thanks to its long history and deep cultural roots, Beijing has a unique collection of architecture, arts, cuisine, and other cultural facets.

Once China was unified by China's first emperor the Beijing region became the capital. For many centuries Beijing's region changed emperors and names, until 1949 when the People's Republic of China was announced and Beijing's name became final and was named the new capital.

Beijing is the second largest city in China.

Beijing is home to the world's largest palace, called the Forbidden City, which has been home to 24 emperors over the course of the Ming and Qing dynasties. The Forbidden City contains 1000 rooms.

Beijing Municipality has a population of almost 22.5 million (almost as many as Australia), in an area of 16,800 square kilometers (or 6,500 square miles). It is China's second largest city after Shanghai.

Beijing is China's most popular city for tourists.

Beijing Capital International Airport is the world’s second busiest airport, and it is most often used as the airport of entry to and exit from China.

Beijing's official flowers are the Chinese rose and the chrysanthemum.

The new 144-hour visa-free transit policy makes the city a more convenient travel destination. It allows travelers from 53 countries to enjoy a 6-day trip in Beijing without a visa.

Beijing has many parking lots dedicated to bicycles because so many people use them for transportation. Beijing is considered to be the bike capital of the world.

From Beijing, it is easy to travel by plane or direct bullet train to most major China destinations.

Some of Beijing's most famous historic sites include the Forbidden City, Tiananmen Square, and the Great Wall of China.

Beijing is a city of extremes when it comes to its temperatures. The highest recorded temperature in Beijing is 42 °C (109 °F) while the lowest is -27 °C (-17 °F). This means the best times of the year to go are spring and fall.

The air pollution in Beijing is so bad that it is considered to be five times the safety standards set for cities.

One of the biggest sights in the city is the Olympic Park, built for the Summer Olympics in 2008. China's National Stadium, or The Bird's Nest, and National Aquatics Center, or The Water Cube, are outstanding engineering marvels.

Beijing was host to the 2008 Summer Olympic Games. That year Chinese athletes won the most gold medals of any country.

The city is currently preparing to host the Winter Olympics in 2022, with large investments in its many skiing and winter sports resorts.

Beijing is home to The Temple of Heaven, the city's holiest imperial temple. It was built in 1420 AD by the Ming Dynasty.

Beijing is situated at 40 degrees north latitude and 116 degrees of longitudes. Beijing covers an area of 16,800 square kilometers, 38% of it is flat land and 62% mountains.

The Ming Tombs, located in Beijing, contain 13 of the 16 Ming Dynasty emperors.

Beijing is located in northern China, abutting Hebei Province to the north, west, south, and to the east in a small part, and Tianjin Municipality to the southeast. As a port city of Beijing, Tianjin is about 200km to the southeast of Beijing.

Beijing duck is the most famous culinary dish from the city. Other popular dishes include Peking duck, hot and sour soup, and Moo Shu Pork.

There are nearly 100 institutions of higher learning such as the famous Beijing University, Qinghua University, over 1000 middle schools and 4500 primary schools in Beijing, with total enrollment of over 2 million.

There are 20 nature reserves in the Beijing Municipality. Animals that live in the mountainous areas include wild boar, red fox, roe deer, masked palm civet, wolf, leopard, and many more.

Beijing, as elsewhere in China, is a city with religious freedom and respects every religion. Buddhism, Taoism, Islam, Catholicism and Christianity are religions found in Beijing. Religious activities are carried out in Buddhist temples, Taoist temples, mosques and churches in Beijing.