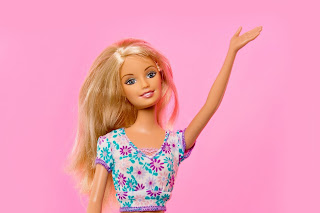 Barbie is a fashion doll that was first introduced by Mattel, Inc. in 1959. Barbie was designed by Ruth Handler, inspired by Bild Lilli - a German doll. Ruth Handler had watched her own daughter play with paper dolls, often giving them adult character roles while most dolls at the time were infants. She realized there was a gap in the marketplace and suggested to her husband, the co-founder of Mattel, Inc, that they create such a doll. After a trip to Germany in which Ruth saw the Bild Lilli doll, she worked with an engineer named Jack Ryan to create a new doll. The doll was named Barbie, after Ruth's daughter Barbara. Barbie launched in 1959 and to date has sold more than a billion.

Ruth Handler was inspired to create Barbie after seeing the 'Bild Lilli' doll in Switzerland, and noticed her daughter liked playing with dolls that resembled older woman, instead of babies.

Barbie is only the doll's nickname. Her real name is Barbara Millicent Roberts, after Ruth Handler's daughter Barbara.

Barbie's first outfit was not pink.

Ruth Handler and her husband Elliot Handler (co-founder of Mattel, Inc.) also have a son. His name is Kenneth (think Ken and Barbie).

Barbie was 'born' in Willows, Wisconsin, according to her biography.

Ken and Barbie's relationship was once on the rocks.

The first Barbie was $3 to buy and she was dressed in a black and white striped bathing suit.

Barbie was never a bride.

A woman named Blondie Bennett spent at least $40,000 to look like Barbie. She had numerous plastic surgeries to make the changes to her body. She has also been reported to be trying to make herself more dumb to be more authentic. She poses in toy stores as a side career for money.

After her split from Ken, Barbie had a two-year fling with Blaine, an Australian surfer. Surf's up.

Ken and Barbie broke up in 2004. They eventually reunited. Because the two were never married officially there was never a need for a divorce.

On Valentine's Day, 2011, she and Ken finally got back together. Mattel broke the news on Barbie's Facebook Page.

Barbie is a Cheesehead for life.

A woman named Blondie Bennett spent more than $40,000 on plastic surgery to look like Barbie, and had a side career posing as the doll in toy stores.

If Barbie were a real woman she would weigh 110 pounds. She would be 5'7" tall, and her measurements would equal 32-16-29 - a very unrealistic shape that has been criticized because it would look ridiculous in real life. Her neck would only be 9 inches in circumference. The doll is 11.5 inches tall.

Barbie had a pony tail when she debuted in 1959. She had a pet horse named Dancer.

More Barbies are sold every year than babies are born.

Barbie has had at least 180 different careers since she was created. Some of these careers included film director, architect and computer engineer, as well as astronaut.

Every second, three Barbies are sold around the world. That's almost 24 times the average 4,000,000 babies born in the U.S. each year.

The most popular Barbie released was the 1992 Totally Hair doll. The doll had hair from her head to her toes.

She recently appeared in a spread in the 50th anniversary of Sports Illustrated's 2014 Swimsuit Issue.

More than 100 people work on every Barbie doll design and character creation before she is released. This includes fashion designers and makeup artists.

It’s often assumed Barbie is from Malibu, but she is actually from the fictional town of Willows, Wisconsin.

A woman named Bettina Dorfmann has the largest Barbie collection in the world according to the Guinness Book of Records. She has more than 15,000 different Barbies.

In celebration of Barbie’s 60th birthday, Mattel has released a line of anniversary dolls. Each doll is a reboot of popular “career Barbies” throughout history, such as the news anchor doll and the astronaut doll.

The best-selling Barbie doll ever was the 1992 Totally Hair doll, with over 10 million dolls sold worldwide.