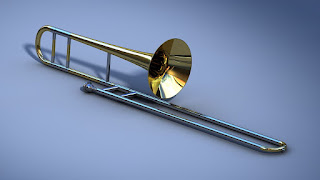 The trombone is a brass instrument, capable of producing sound that is rich and brilliant, lower than the French horn but not as low as the sound produced by a tuba. The trombone was developed from the trumpet common in the Medieval era and was documented in Ferrara court records in 1439. The Duke of Burgundy had a trombone player at his wedding in 1468. During the Renaissance and Baroque eras the trombone was referred to as a shakbusse or sackbut. It was lacking in some of the features of the modern trombone, but it had a double slide which allowed for lower scale sounds. The sackbut was the first musical instrument to have a moving slide.

The trombone has also been used to musically depict the depths of Hell in Mozart’s opera Don Giovanni, the chopping off of a head in Richard Strauss’ Till Eulenspiegel, thunder and lightning in Beethoven’s Pastoral Symphony, and the raucous crowd anticipating and delighting in a beheading in Berlioz Symphonie Fantastique.

Trombonists are often asked to count a large amount rests or simply wait until the end of a symphony or opera before they get to play.

Trombonists often use a plunger mute in jazz to achieve the effect of a human voice speaking.

The first documented use of a trombone in public was a wedding gig.

The first composer to create a symphony trombone part was Beethoven who included it in his famous "Fifth Symphony".

The earliest record of a trombone dates to the 15th century.

The trombone is a popular instrument to portray dark moments in operas such as "Don Giovanni" (by Mozart), or "Till Eulenspiegel" (by Richard Stauss).

The trombone uses a slide to alter pitches, rather than a valve. It is the only instrument in the brass family to do so!

The trombone has been called multiple names, including dracht (draught, draucht) trumpet and tuba ductilis.

Trumpets were featured in various paintings, images, and diagrams since the 15th century. The first visual of a trombone was in Filippino Lippi’s fresco The Assumption of the Virgin in S Maria sopra Minerva, Rome in 1488-93.

The first diagrammatic depiction of a trombone is Aurelio Virgiliano’s Il dolcimelo (1600).

The oldest surviving trombone was made in 1551.

One of the most notable early mouthpieces is embellished with the mark of the Schnitzer family, who made trombones in Nuremberg in the 16th century.

It was not until the late 18th century that the trombone became an official part of the orchestra.

German trombones from the late 19th and the early 20th centuries often carried a traditional mark of a pair of snakes dancing across the bell bow. These snakes are called, “Schlangenverzierungen.”

The trombone is rarely heard as a solo instrument, apart from in some jazz music.

There are just a few notable trombone soloists, however, predominantly form the 19th century.

When the teacher in the Charlie Brown cartoons speaks, her voice is the sound of a trombone.

The group including C.T. Queisser and F.A. Belcke in Germany, and in France, A.G. Dieppo.

Sigmund Freud said that the trombone made him uncomfortable and Mark Twain was not a fan of the instrument either, referring to it as 'unholy trombone', and referring to the music it produces as 'wretched music' with 'discordant sounds'.