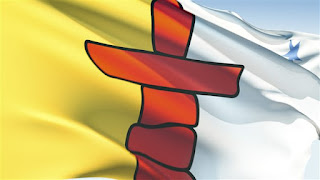 Nunavut is a massive, sparsely populated territory of northern Canada, forming most of the Canadian Arctic Archipelago. Its islands have expanses of tundra, craggy mountains and remote villages, accessible only by plane or boat. It's known for its indigenous Inuit people's artwork, carvings and handmade clothing. Inuit art is displayed at the Nunatta Sunakkutaangit Museum in the capital, Iqaluit, on Baffin Island.

Nunavut is Canada’s largest province/territory with a total area of 2,093,190 sq. km.

Nunavut is located north of Manitoba, east of the Northwest Territories, and southwest of Greenland.

In the 1700s fur traders set up trading posts in Nunavut.

Nunavut is very big, if it were a country it would be the 15th largest country in the world.

As outside influence began to be pushed on the Inuit they began to forget their own traditions. This led to their eventual request for their own territory.

The most common languages spoken are Inuktitut, Inuinnaqtun, English, and French.

Nunavut is Canada's third territory, and the largest in the country as well.

Nunavut is home to Tim Horton’s most northern location. As the newest territory, it was the last province/territory to get a Tim’s.

Nunavut’s territorial flower is the purple saxifrage, its animal is the Canadian Inuit Dog, and its bird is the Rock Ptarmigan.

In the Inuktitut Inuit language, 'Nunavut' means 'our land'.

Roughly 75% of the world’s narwhal population migrate into Nunavut’s island estuaries and shallow bays like those near Pond Inlet and Arctic Bay.

The most common languages spoken in Nunavut are French, English, and Inuktitut.

The capital city, Iqaluit, has the second-highest tide in Canada. Everyone knows about the enormous tide at the Bay of Fundy, but the tide in Iqaluit reaches 12 metres.

Iqaluit has the largest population in Nunavut, in fact, it is the only community that is large enough to be considered a ‘city.’

The economy in Nunavut is dependent on mining, oil and gas, minerals, fishing, hunting, arts and crafts, education, tourism, whaling, and tourism.

The capital regained its traditional Inuktitut name of Iqaluit, meaning “place of fish” when Nunavut was created. It had been called Frobisher Bay, named for the bay that the community is situated on.

In Iqaluit, taxis charge a flat rate of $7 to get anywhere! Maybe you’re going to the old Hudson’s Bay Company trading post or maybe it’s to one of the art galleries and museums. All just $7.

The highest point in Nunavut is Barbeau Peak on Ellesmere Island at the height of 2,616 metres (8,583 feet) above sea level. It is the highest peak along the Arctic Cordillera mountain range.

Most of Nunavut's land and water is frozen for the majority of the year.

Nunavut also has mountains, tundra, frozen soil, and small shrubs are able to grow, along with some moss and grass, in the ground.

Quttinirpaaq National Park is the second most northerly park on Earth. In Inuktitut, Quttinirpaaq means “top of the world.”

Nunavut is considered to be a polar desert. It doesn't snow very much there, despite its northern location.

Nunavut has 5 national parks and 10 territorial parks. And these are breathtaking parks filled with amazing iconic wildlife and spectacular panoramic views.

Nunavut's tourism is popular with those who like to see the wildlife, or to hike, camp, fish, or hunt.

The entire territory of Nunavut has just under 32 km of paved road. To get to communities people use planes, boats, and snowmobiles.

Aakuluk Music is Nunavut’s first record label. It was started by the incredible band from Iqaluit, The Jerry Cans, with the goal of supporting Inuit and Indigenous musicians.

It is too cold to grow vegetables and fruit in Nunavut so these food items must be flown in or brought in on barges or boats. Some are grown in greenhouses too when possible.

Baffin Island is the 5th largest island in the world! It has mountains like the Arctic Cordillera range, glaciers, and ice caps like Penny Ice Cap.

Many Nunavut towns are not able to be reached by truck and rely on airplanes or boats for supplies.

Nunavut’s earliest sunset is on December 17th at 1:40 pm. And their latest sunrise is December 24th at 9:25 am. However, in the summertime, they get tons of sunlight. On June 20th Iqaluit gets 20.5 hours of sunshine!

Nunavut's flower is the purple saxifrage. Its animal is the Canadian Inuit dog, and the bird is the Rock Ptarmigan.

It also has only 32 km of paved roads and no traffic lights.

Iqaluit doesn’t get 24 hours of sunlight.

In June there are almost 24 hours of daylight each day in Iqaluit.

A taxi to anywhere in Iqaluit costs exactly $8.

In December there are only about 6 hours of daylight in Iqaluit.

Iqaluit has the second highest tides in the world (between 8 and 12 m).

The communities in Nunavut have both a harbour and an airport.

NuBrew is a microbrewery located in Iqaluit that opened just a few years back.

Inuksuit are commonly found in the Arctic. They are stone tower made by Inuit. They can also be seen in other parts of North America as well.

Some communities in Nunavut are dry. This means there is absolutely no alcohol permitted in the community.