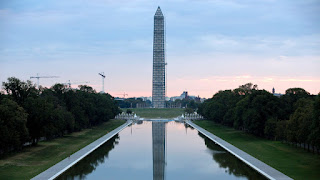 The Washington Monument was built to honor George Washington, who was the first American president. It is built in Washington, D.C., beginning in 1848. Construction was completed in 1884, despite a temporary halt from 1854 to 1879 due to lack of funds, and the American Civil War, among other issues. The monument was officially opened on October, 9th, 1888, although it was dedicated on February 21, 1885. Once it was completed it was the world's tallest structure. In 1889, the Eiffel Tower was completed and took the title of the world's tallest structure.

The Cover was made out of marble from Maryland.

Although the monument was meant to honor George Washington, the first president, it was not completed until the 21st president was already in office.

The original elevator ride to the top took 20 minutes. Only men were allowed in the elevator as it was thought to be unsafe. Women and Children had to climb all 897 stairs.

When George became president he didn't want to use public money for the monument and killed the project.

The monument is the tallest structure in Washington DC. Until the Eiffel Tower was built it was the tallest in the world.

George Washington died in 1799, and in 1833, a group began to raise money for the monument. They called themselves the Washington National Monument Society.

In 1982 a nuclear arms protester threatened to blow up the Washington Monument. The protester got shot and killed.

It Cost 225$ to make the aluminum cap that sits on top of the Washington Monument.

Once you make it to the top you can see over 30 miles.

The final design of the Washington Monument was quite different from Robert Mills' design.

The monument's cornerstone included a portrait of George Washington, U.S. coins, a copy of the Constitution and newspapers.

There are 50 flags surrounding the building representing each state.

Abraham Lincoln, a congressman at the time, attended the ceremony to lay the cornerstone on July 4th, 1848.

In 1854, money ran low and construction stopped. The monument was about 150 feet high at that point.

An estimated 800,000 people visit the monument every year.

Aside from money issues, and the Civil War, construction was halted because anti-Catholic, anti-immigrant activists called Know Nothings were opposed to the Pope Pius IX's donation of black stone for the monument.

President Ulysses Grant ensured that the project continued, beginning again in 1879, by authorizing the use of federal funds for the completion.

The Washington Monument features no less than 194 memorial stones.

At this point, Robert Mills' design changed a lot because of new architectural tastes.

The Washington Monument is lightning-proof.

When the construction was completed, and it opened to the public in 1888, it was just over 555 feet tall and weighed more than 81,000 tons.

The monument has 50 flights of stairs.

The monument was once used during a hostage taking. In 1982, a Navy veteran parked his van, with a reported 1,000 pounds of dynamite inside, at the base of the monument. There was a group of tourist stuck inside the monument for hours. When it was over, the Navy vet was shot dead and there were no explosives in his vehicle.

There are many memorials to George Washington, including schools, mountains, highways and cities and one state.

There is another monument in Baltimore named for Washington that was also designed by Robert Mills.

An earthquake in 2011 damaged the monument and it has been closed for repair. It is estimated it will cost $15 million and will be reopened in 2014.